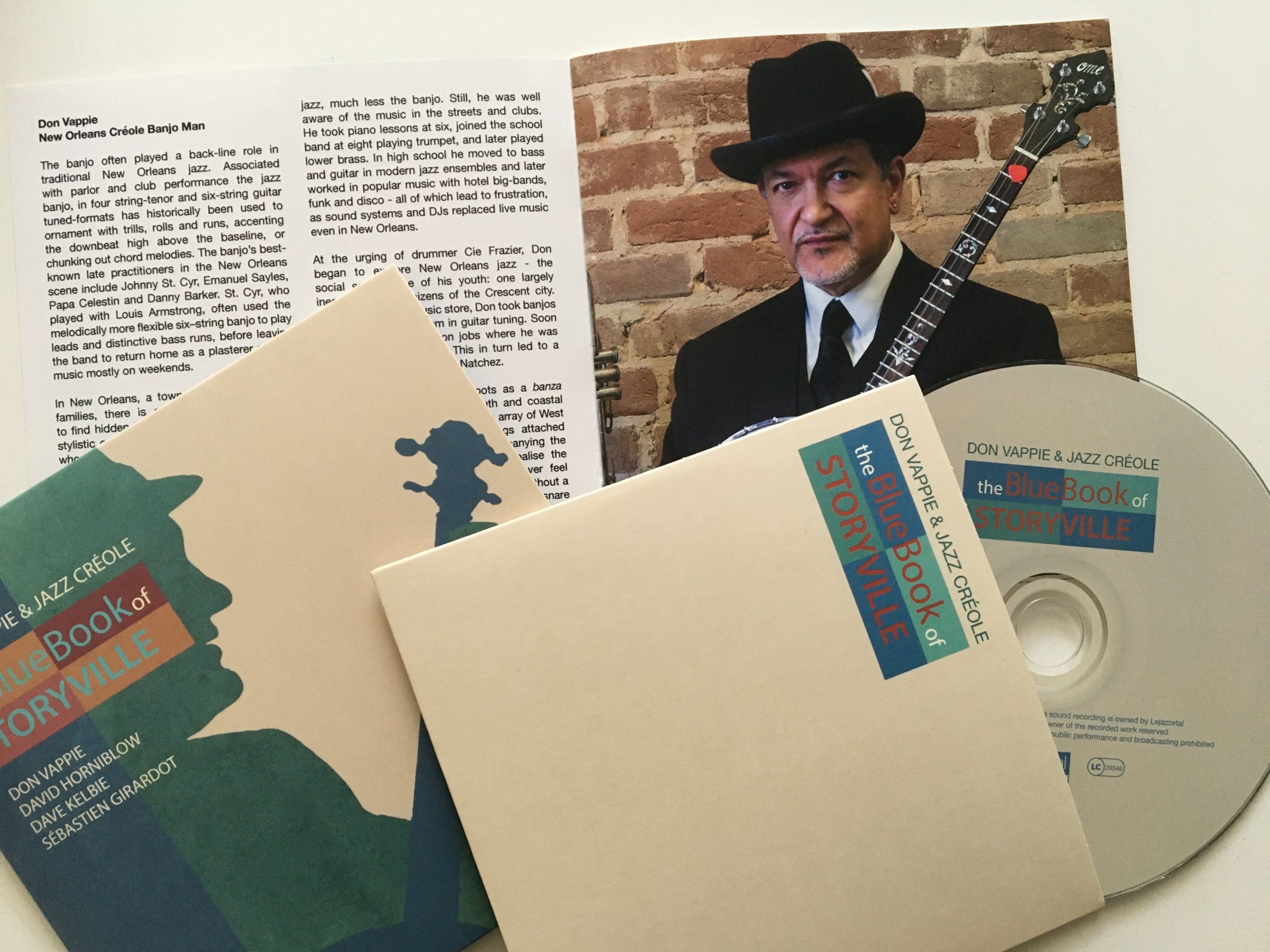 Don Vappie (banjo, vocals); David Horniblow (clarinet); Dave Kelbie (guitar); Sébastien Girardot (double bass)
Don Vappie has amassed an impressive back catalogue of recordings as a bandleader and sideman. The Blue Book of Storyville on Dave Kelbie’s Lejazzetal Records is the banjoist’s latest as leader and he is in good company working with David Horniblow, clarinet, Lejazzetal label boss Dave Kelbie, guitar and Sébastien Girardot, double bass.
Seventeen tracks stretching over the best part of seventy minutes are band arrangements of familiar, some less familiar, numbers with a particular emphasis on Vappie’s Créole heritage. The vocals – in English and in French – are Vappie’s and his sunny disposition comes shining through. The Blue Book of Storyville (comp. D. Vappie) is an early highlight swiftly followed by Jelly Roll Morton’s Buddy Bolden’s Blues.
David Horniblow is well versed in the Crescent City style (Horniblow’s The Complete Morton Project duo album with pianist Andrew Oliver on Lejazzetal is recommended listening) and on this 2019 Vappie recording the London based clarinettist makes several incisive contributions.
It comes as little surprise to find New Orleans’ staples Basin Street Blues and Red Wing making the cut alongside Vappie’s own compositons. The Blue Book of Storyville (the title track) is Vappie’s critique of his home city’s red light district, its bawdy houses of a century ago and songs of the period which were rather disparaging of the women working on the upper floors as the ‘piano professors’ worked the bar room below.
The New Orleans Rhythm Kings’ Tin Roof Blues, sounding as good as ever almost a century on, is paired with Créole Blues, a tune, as Nick Spitzer points out in his informative sleeve notes, Vappie learned from the 1947 version recorded by Danny Barker and Albert Nicholas. The rhythm boys on this album – Dave Kelbie and Sébastien Girardot – know their onions (French or otherwise) when it comes to the repertoire and, tune after tune, lay down a solid foundation.
Lejazzetal’s reputation goes before it, this new Don Vappie album serves to reaffirm it. Recommended.
RUSSELL