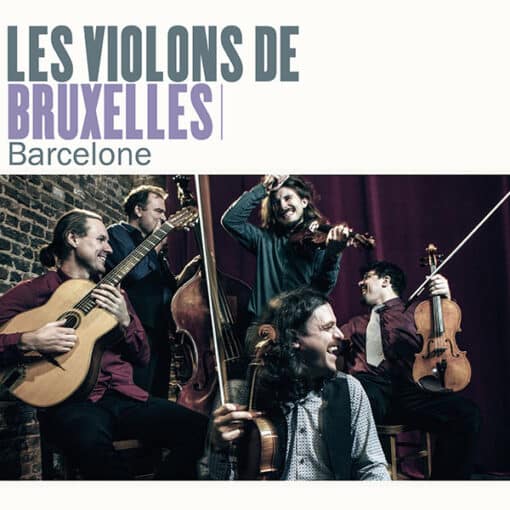 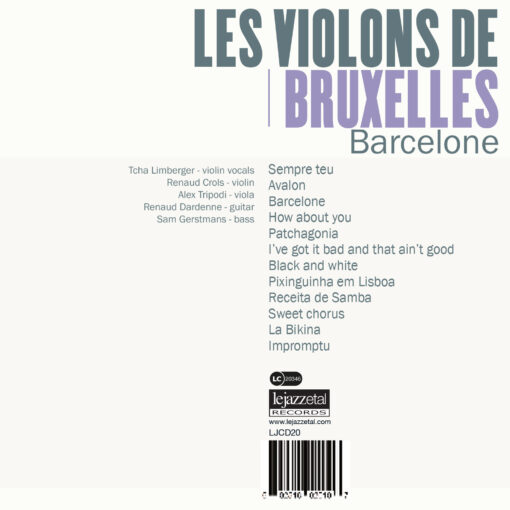 JAZZ DA GAMA 02.07.2019
almost impossibly breathtaking to bear witness perfection on such a scale
A new way of thinking about strings in the context of anything from the traditional music of New Orleans to swing and – with Barcelone – well beyond as well, is probably a reasonable approximation of what Les Violons de Bruxelles is hoping to convey to serious aficionados of music. The first thing to acknowledge about the music played by this ensemble is, of course, that what they play and the manner in which they express themselves – with broad syncopation and a generous helping of improvisation – offers a strong but not slavish period awareness. As a result the group’s interpretations of repertoire that is often well worn almost never even rings with familiarity.
The very high degree of instrumental proficiency is, of course, topped by the genius of Tcha Limberger who is a musical polymath equally at home in his native Manouche music as he is in the traditional (or folk) music of the Carpathian basin, not to mention Jazz. Add to that Mr Limberger plays violin and guitar with breathtaking virtuosity and is also a vocalist of the first order although he rarely sings often enough on his recordings. As if that were not enough violinist Renaud Crols, violist Andre Tripodi, guitarist Renaud Dardenne and contrabassist Sam Gerstmans also play with a mastery of instrumentation and imagery to deliver music with idiomatic beauty and eloquence as well.
Together in ensemble and while soloing therefore, the musicians of Les Violons de Bruxelles unfailingly deliver repertoire that is sensitive, punctuated with singular improvisatory responses to the charts, always taking the music to emotional and stylistic directions which, in turn., carry us off to surprising and profound new musical waters. Sometimes this means performances that are loosely rooted in traditional forms, such as on “Avalon” and a stellar performance of “I’ve Got it Bad and That Ain’t Good” (in which Mr Limberger delivers the lyric with his superb vocal), and at other times with looser and freer form and atonality as on Django Reinhardt’s darkish piece, “Impromptu”.
To my mind (at least) the absolute crowning glory of the recording are the two Brasilian formed works on the album, which are “Pixinguinha em Lisboa” and “Receita be Samba”. The former – an original composition (no less) by Renaud Dardenne, is a meditative, and translucent choro which imagines a dreamy visit of the great Brasilian musician Pixinguinha to Lisbon. It is a piece so vivid in its detail that one feels the heat of sun on cobble-stones and the lonely chill whipped up by a sudden wind in the night; and if you’re thinking “a watercolor painting”, this one is all in “black and white”. Meanwhile the latter piece – a classic from the pen of Jacob de Bandolim – is a magnificently conceived samba that evokes the dusty streets of Rio in the throes of a carnival.
It’s almost impossibly breathtaking to bear witness perfection on such a scale – both in performance and the documentation of it in this recording by the incomparable musician and engineer Dylan Fowler; but then this is music by Les Violons de Bruxelles that we’re talking about, a musical ensemble recorded at his Stiwdio Felin Fach, in Abergavenny, the Gateway to Wales; and that means music and the recording of it performed and captured in an altogether rarefied realm.
RAUL DA GAMA

SUNDAY TIMES 30.06.2019
Barcelone – Les Violons de Bruxelles
You may have seen the violinist Tcha Limberger fronting his rambunctious Budapest Gypsy Orchestra. This quintet are sleeker, yet every bit as unpredictable. Two violins and a viola float above Django-esque guitar and bass, the repertoire wandering far from standard Hot Club fare. The excursions into mellow Brazilian choro are a delight, and Limberger isn’t afraid to add unfussy vocals to I’ve Got It Bad and That Ain’t Good.
CLIVE DAVIS

JAZZ JOURNAL – 24.06.2019
Les Violons De Bruxelles: Barcelone
Stephane Grappelli’s position in the acoustic Quintette du Hot Club de France was interesting. As the stand-up flamboyant, a lone violinist in an all-strings jazz band might be expected to shoulder most of the responsibility. But the Quintette had two limelight hoggers – Grappelli and Django Reinhardt.
According to Charles Delaunay, guitarist Reinhardt claimed more importance because his rhythm contribution when Grappelli was taking the lead conferred greater advantage. Reinhardt often laboured the point with savage chugging, made more ferocious when later playing electric. Not that any violin could reciprocate much.
Grappelli post-Reinhardt and post-QHCF reasserted himself successfully, and Les Violons De Bruxelles, also a quintet, has followed his example. Violins can now rule in this ensemble; two of them, in fact, plus a viola.
Should one feel sorry for guitarist Renaud Dardenne? Not much. Like the other four musicians, he takes his turn in the arrangements, which are entertainingly varied, often featuring the violins and viola as a string trio, though not of the classical kind, which is customarily violin, viola and cello. Dardenne solos as often as is deemed appropriate.
The competitive element has gone, too, along with most of the QHCF’s trotting. This is because the influences are wider, and the divisions of labour more frequent. Dardenne doesn’t even solo on Grappelli-Reinhardt’s Sweet Chorus. Sometimes Sam Gerstmans’s bass leads off (Avalon and Barcelone). Alexandre Tripodi’s viola takes up the theme of How About You before he and his colleagues play around with it.
So, LVDB is not a QHCF simulacrum. Lead violin Tcha Limberger’s deliberate reversal of the instrumentation has seen to that by allowing entry to wider musical influences, as the titles suggest. And as if to prove the way ahead is not held back by the past, Reinhardt’s Impromptu is madcap – and great fun.
NIGEL JARRETT

Be the first to review “Barcelone (Downloads)” Cancel reply