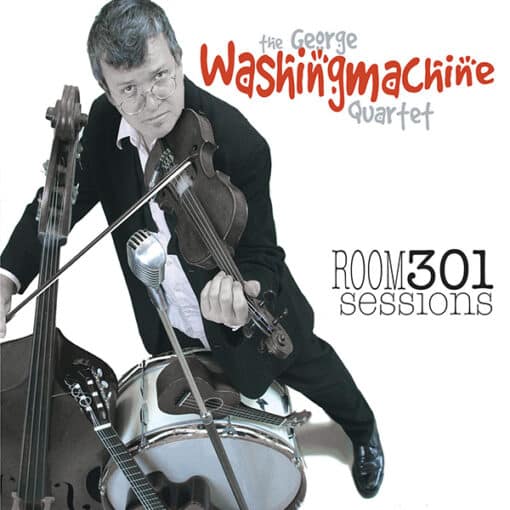 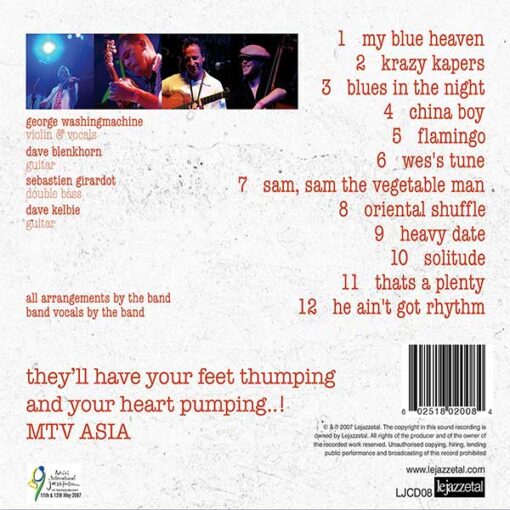 they’ll have your feet thumping and your heart pumping
MTV ASIA
it made you want to tap feet, nod your head and smile goofily
THE SARAWAK STAR MALAYSIA
his quartet still swing like crazy
THE JAZZMANN UK
Swings like God’s fire
ETUDES TSIGANE FRANCE
relentless good humour and a band swinging like the clappers. Simply marvellous!
BERNHARD GIERSTL – HOTCLUB NEWS

HOTCLUB NEWS GERMANY 13.02.2008
The Room 301 Sessions
This CD is a force to be reckoned with and almost swaggers with good spirits.
The Australian singer and violinist George Washingmachine swings his way through a repertoire not heard every day of the week; one half instrumental, the other vocal. The quartet (consisting of Dave Kelbie and Dave Blenkhorn on guitars, Sebastien Girardot on bass and G.W. on violin and vocalchords) recorded this in Room 301, Parkhotel in Miri, Malaysia.
The musicians had an audibly good time in numbers such as “Blues in the night” or “He ain\\’t got rhythm”. There are no musical backflips (cartwheels) here, just relentless good humour and a band swinging like the clappers.
Simply marvellous!
BERNHARD GIERSTL

DJANGOSTATION FRANCE 02.04.2008
What a disk!
Recorded in the intimacy of a hotel room (room 301, thus the title), this cd from the violinist George Washingmachine (yes…that\\’s his real name) abounds in all that is swing
… We notice that the hotel in question is in a town called Miri in Malaysia where the Miri International Jazz Festival is held every year. These sides were collected in between press conferences, interviews and various excursions around the island. Lets Rejoice! Apparently there is also swinging music in the South China Sea and the Malaysian Jungle!
George Washingmachine is an australian violinist, but also multi-instrumentalist and singer. Although based in Sydney, he has many active bands and recordings which he uses to export his Entertainment Art in Europe. His niche is without a doubt the 30\\’s and 40\\’s swing which he delivers with a particularly style, sometimes playing some extremely fast tempos. His drive on the violin and his joie de vivre while singing are appreciated by all. Especially because his repertoire is often humorous (Sam, Sam, the vegetable man, Heavy date) and he never hesitates to call on his band for group vocals (Blues in the night, He ain’t got rythm). Swing and blues are sometimes put to the side for the occasional bolero (Flamingo) or ballad (Solitude), but Mr Washingmachine seems a little less in his element….No, George\\’s things is obviously the Swing, Swing….and more Swing!
SEBASTIEN LEGE

THE JAZZMANN UK 13.02.2009
Enjoyable and unpretentious
The improbably named Washingmachine quartet are one of the numerous combos to record for Dave Kelbie’s Lejazzetal label. Kelbie takes the music of Django Reinhardt as his main inspiration but is no mere copyist. The outfits that record for his label, among them the Angelo DeBarre Quartet and Evan Christopher’s Django A La Creole throw fresh light on the Hot Club sound. Both these acts have been reviewed elsewhere on this site.
Australian violinist and vocalist Washingmachine adds a new flavour to the pot-humour-but his quartet still swing like crazy. As on most of the label’s recordings Kelbie appears on rhythm guitar, driving his colleagues forward in his exemplary trademark fashion. He is the sole UK representative on this record with two other Aussies making up the group. Dave Blenkhorn plays lead guitar with Sebastien Girardot undertaking double bass duties.
The album was recorded in the unlikely setting of Room 301 of the Park City Hotel in Malaysia between the group’s engagements at the Miri International Jazz Festival. The quartet alternate between vocal and instrumental numbers concentrating in the main on American material from the swing area.
Behind Washingmachine’s zany persona there is real musical ability. Although he sticks to violin here he is in fact a talented multi instrumentalist. His singing is adequate, nothing more but is perfectly acceptable for this type of material. As a violinist he turns in some excellent solos over the course of the album as does Blenkhorn who seems to be particularly inspired on this recording.
The band hit the ground running with the first vocal item, a good natured take on “My Blue Heaven” with Blenkhorn taking the instrumental honours. Next comes a spirited romp through “Krazy Kapers” on which Washingmachine demonstrates his abilities with the bow and Blenkhorn shines again. Kelbie and Girardot provide a splendid rhythmic pulse throughout and the bassist enjoys a few moments in the limelight.
This pretty much sets the pattern for the record, a whimsical version of the song “Blues In The Night” is followed by the scorching instrumental “China Boy” taken at breakneck tempo. Marvellous.
I’m less keen on the arch vocalising on “Flamingo”, a number that strays a little too far into MOR and “novelty” territory. The following instrumental “Wes’s Tune” (Montgomery, presumably) comes as a welcome relief and features some excellent violin playing.
“Sam, Sam The Vegetable Man” is real novelty number but is so self consciously daft you can’t help but enjoy it. It evokes the spirit of the late Slim Gaillard but along with the zaniness there’s some dazzling playing and it’s all great fun. A langorous instrumental, “Oriental Shuffle”, brings things back down to earth.
Like “My Blue Heaven” “Heavy Date” also features other members of the quartet on backing vocals. The voices on “Heavy Date” recall the jump jive era even though the instrumentation is pure Hot Club with swinging solos from Washingmachine and Blenkhorn.
The next item “Solitude” is actually another vocal item. It is the album’s only ballad and Washingmachine’s fragile vocal is surprisingly effective. This reflective interlude is in stark contrast to the other material and this only serves to increase it’s poignancy.
It’s business as usual on the instrumental “Thats A Plenty”, a refreshingly brisk gallop in archetypal Reinhardt/Grappelli style. The final vocal item “He Ain’t Got Rhythm” bookends the album in enjoyable fashion.
The “Room 301 Sessions” is an enjoyable and unpretentious record that unashamedly seeks to entertain. Most of the time it does exactly that and I’m certain that the quartet’s live shows must be hugely enjoyable. Some of the vocal numbers may pall for the home listener after a while but the dazzling instrumental work largely makes up for this.
Another worthwhile offering from the Lejazzetal stable and one that casts a highly entertaining light on the Reinhardt legacy.
IAN MANN

SCOTLAND ON SUNDAY UK 06.04.2008
Room 301 Sessions
From the same “jazz should be entertaining” school of thought as the great Marty Grosz comes the inexplicably named George Washingmachine, an Australian violinist and vocalist who has appeared at a few Edinburgh Jazz Festivals over the years.
This new CD features him in Hot Club mode, with two guitars and a bass, and it showcases his excellent, swinging and joyful violin-playing. The vocals are fairly nondescript, but at least on CD the jokes are left out.
ALISON KERR

Be the first to review “Room 301 sessions (Downloads)” Cancel reply