An Australian resident in London, Michael McQuaid has been thrilling jazz audiences with his remarkable clarinet, saxophone and trumpet playing since his first professional appearances at the age of fifteen. Although he has since become one of the world’s foremost authorities on early jazz arranging styles, Michael is not content with limiting himself to recreations – instead, he aims to bring new energy and ideas to bear on the rich sounds of the past. The Michael McQuaid Saxophone Quartet is a sophisticated chamber jazz group that does just that.
The project was inspired at first by virtuosic saxophone innovator Merle Johnston, whose own quartet recorded just four titles in 1929 and 1930. A first-call musician in New York’s burgeoning radio and dance band recording scene, Johnston established many of the central tenets of saxophone section playing, such as matched phrasing and vibrato, ultimately influencing both jazz and classical musicians for decades to come. His quartet chose some of the most interesting popular songs of the era and infused them not only with jazz rhythms but also advanced harmonies drawn from composers like Debussy and Ravel. Michael has taken these scarce records as a foundation for his own new arrangements, giving a greater variety of repertoire a similarly elegant treatment; whilst the source material might be jazzy and rhythmic, the treatment abounds with modernist devices and impressionistic tone colours. The results, performed by four unaccompanied saxophones, produce an astonishing range of sounds far beyond what might be expected or imagined. Just as a string quartet gives space for its instruments to breathe, the Michael McQuaid Saxophone Quartet provides an opportunity to open one’s ears to the saxophone beyond tired cliches.
Now performing across the UK and further afield, the quartet draws on the works of some of the finest and most loved composers of the early 20th century, including Scott Joplin, Ernesto Nazareth, George Gershwin and Duke Ellington.

MICHAEL MCQUAID – Alto 1, Musical Arranger
An acknowledged authority on early jazz and swing, Australian-born Michael McQuaid has travelled the world playing saxophone, clarinet and trumpet with artists like Keith Nichols, Vince Giordano, Bob Wilber and Andy Schumm. He is a leading exponent of the powerful magic of 1920s and 1930s orchestration, having honed his craft writing music for his own bands since the age of 15. This project also showcases his mellifluous lead alto sound, shimmering on top of the ensemble.

DAVID HORNIBLOW – Alto 2
Known for his impressive clarinet and saxophone playing with the Dime Notes, Chris Barber and other UK jazz greats, David Horniblow is a musician with a reputation for combining style and substance. Initially a student of classical clarinet at Guildhall School of Music and Drama, David also has a deep love and understanding of early jazz styles, evident in the painstaking research and preparation he puts into each performance. It’s no wonder the results are so good.

SIMON MARSH – Tenor
One of London’s busiest and most versatile musicians, saxophonist/clarinettist/flautist Simon Marsh may be found performing in West End musicals, playing hot jazz with Alex Mendham & His Orchestra, or recording with an orchestra at the famous Abbey Road Studios. He has a gift for inhabiting a range of different musical styles, always to the highest level imaginable – his performances in this quartet are no exception.

TOM LAW – Baritone
Tom Law is a graduate of no less than three musical establishments – Chetham’s School of Music, the Royal College of Music, and Guildhall School of Music and Drama. He combines all this training with his own sense of taste and style to produce beautifully smooth performances, whether he is playing classical saxophone repertoire, jazz clarinet with Alex Mendham & His Orchestra, or flute behind famous cabaret stars. His sonorous baritone sax sound provides the ideal foundation for this project.

Superb, nay – ravishing, performances
NORMAN FIELD, JAZZ HISTORIAN AND MUSICIAN UK
Astonishingly beautiful…No one else is doing anything like this!
MICHAEL STEINMANN ‘JAZZ LIVES’ US
Michael McQuaid should be a household name among traditional jazz fans. He’s one of the top reedmen of this generation, and a force behind many wonderful projects…
STNCOPATED TIMES US
A terrific Clarinettist! From one player to another
ACKER BILK
an acknowledged authority on this era of music…swinging…sensually lush
STEVE ROBERTSON, BROADCASTER & JAZZ CRITIC, US
one of those youthful heroes who can play a shopful of instruments…
JAZZ LIVES US
Horniblow’s playing is nimble, incisive and assured
JAZZ JOURNAL
David Horniblow’s clarinet spits fire
THE SUNDAY TIMES UK 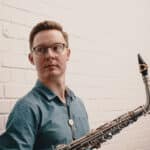 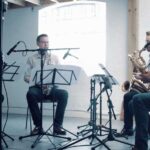 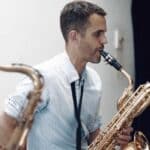 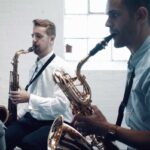 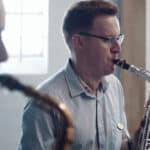 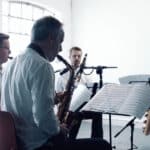 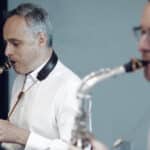 https://mcquaidjazz.com
BACK TO THE RECORDS