With the help of the great Greek soloist of accordion Dimos Vougioukas, Tcha Limberger explores the wonders of Greek music present in Istanbul (Konstantinoupolis) and Smyrne (Asia Minor) at the beginning of the 20th century before Rebetiko. The intriguing rhythms Zeybek, Karsilama, Hasapiko and Kalamatiano with the full use of quarter tones similar to Turkish Makam, make Limberger’s attraction to this music almost indescribable.
Vougioukas has cooperated with well known soloists from Greece and Balkans such as Stavros Kouskouridas, Kyriakos Gouventas (Greece), Petar Ralchev (Bulgaria), Ionica Minune (Romania). He participates in the Greek orchestra “Estoudiantina” as a soloist, he redacts the orchestration-arrangements and he constitutes one of the founding members.
They are joined by Benjamin Clement on guitar, a Belgian musician very active in the background of great players such as Nedyalko Nedyalkov, Lakatos Roby, Kiriakos Gouventas and Marcel Ramba. He has the biggest and most precise knowledge of rhythm and harmony from almost any country in central and Eastern Europe.

Kurtuluş, (Turkish for Liberation, Salvation, formerly known as Tatavla meaning “horse stable in Greek: Ταταύλα) is a cosmopolitan neighborhood of Şişli whose population consists of Turks, Greeks (now almost completely emigrated), Armenians (who still live there in numbers), Kurds (who are relatively recent economic migrants), and Jews (who still live there in numbers). The Turkish name means “independence”, “deliverance” and also “good riddance”.
The quarter was originally built in the 16th century as a residential area for Chian Greeks, settled here to work in the principal dockyards of the Ottoman Empire which were situated in the neighboring Kasımpaşa quarter. In 1832, a fire swept and completely destroyed the neighborhood with 600 houses and 30 shops going up in flames. Tatavla emerged as an entirely Greek part of Istanbul, while during the 19th century reached a population of 20,000 and hosted several Orthodox churches, schools and tavernas. It was nicknamed Little Athens due to its Greek character.
The neighborhood’s name was changed to Kurtuluş, six years after the Republic of Turkey was founded, for its rebuilding and symbolizing its rejuvenation, after a fire swept and largely destroyed the neighborhood on April 13th 1929, with 207 houses going up in flames. Despite the turmoil of the Balkan War, followed by World War I and the following Greco-Turkish War (1919–1922) and the devastating fire, the neighborhood continued to retain its large Greek population and atmosphere, at least until the riots of 1955. It was typically the residential area for Greeks of more modest income, as opposed to, for example, Tarabya on the Bosphorus, where richer Greeks as well as rich Turks and Europeans lived. Nevertheless, a number of beautiful houses were built in the late 19th century, some of which still stand today.
Kurtuluş, was also the place that ended the Baklahorani carnival, an annual event led by the Greek community of the city, which was banned by the Turkish authorities in 1943, but got revived in 2010. 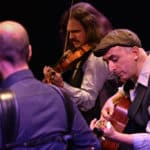 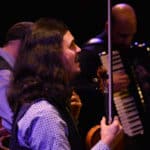 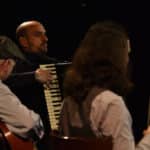 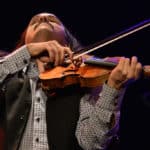 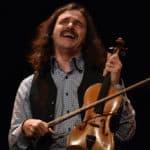 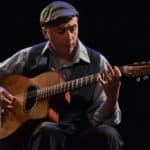 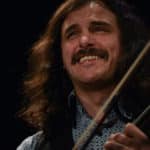 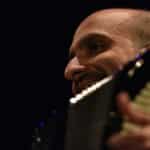 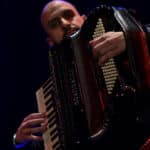 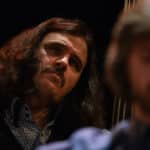 SONGLINES 20.01.2018 – Trio Tatavla: Tatavla
Tcha Limberger goes to Greece and embraces a lost music of Istanbul
Tatavla was, it appears, a neighbourhood in Istanbul where the Greek speaking community once performed much music, especially songs that celebrated the Byzantine tradition of wine songs. This musical genre seemingly existed pre-rembetiko and thus is largely forgotten today in a Greece that prefers to erase any connection to a time when Asia Minor was a blend of Orthodox and Muslim communities who shared music and food and much else. Tcha Limberger, the polymath Belgian fiddler whose versatility has found him mastering Gypsy jazz, Transylvanian folk and the long forgotten Budapest Magyar Nota music, digs into tatavla music with Greek accordionist Dimos Vougioukas and Belgian guitarist Benjamin Clement. The 12 numbers here are largely instrumental – Limberger sings on occasion, his voice is adequate yet less impressive than his fiddling – and find the fiddle and accordion locked into a sublime duet of sorts as they push and pull the music every which way (guitar is largely an accompanying rhythm instrument here). I can’t claim any prior knowledge of tatavla music but what’s here, acoustic and superbly recorded, has a fresh, vivacious feel to it, Trio Tatavla adding atmosphere and dynamic to the day. Anyone interested in music from the Balkans/Asia Minor will find Tatavla an inspired, very enjoyable album.
4 STARS
GARTH CARTWRIGHT

WORLD MUSIC REPORT 20.01.2018
Trio Tatavla: Tatavla
This, first and foremost, is a labour of both love and scholarship. As he has done with his traditional Transylvanian, Romanian and Gypsy recordings, Tcha Limberger combines a career as a violinist with that of an academic, specialising here in the music of Byzantine era Constantinople (Istanbul) Greek “Tatavla” celebratory music. And here the violinist becomes the pivot of an extraordinary trio that also includes Dimos Vougioukas on accordion and Benjamin Clement on guitar. The traditional repertoire played by the Trio Tatavla brings vivid local colour, a bright and emotional landscape and is magically combined with greater freedom and enriched harmonic experimentation.
All this while styling essentially true to tradition in rhythms such as karsilama and syrto. Moreover, the three musicians engage each instrument in remarkable melodic shaping and also in complexity of accompaniment. Each and every complex piece is exquisitely shaped allowing the musicians to be rhapsodically introspective and eloquent throughout.
In Tatavla music the heraldic and celebratory combines with the natural world which is frequently present and ever enigmatic. Nature here is not domesticated and anthropomorphised; it’s wild and strange and beautiful. Contours, tones, shiftings of sound are pieced together with a logic that’s rigorous, yet at the same time delirious. The cycle of songs, featuring Tcha Limberger’s violin and voice at the core features thrilling extended techniques on the accordion by Mr. Vougioukas and sublime textural layering by Mr. Clement’s guitar. Together with Mr. Limberger, the three musicians’ performances are brilliantly committed and utterly compelling.
Track list – 1: Foties (Dance from Mytilini – trad); 2: Manes tis kalinihtias (Amane/Lament song – trad); 3: Megaritikos karsilamas (Karsilama dances from Megara – trad); 4: Memetis (Song from Smyrni/Izmir – trad); 5: Pergamos ((Zeibekiko dance from Pergamos – trad) & Aidinikos (Dance from Aidini – trad); 6: Ematha pos paizeis zaria & Hasapiko (Hasapiko dance from Constantinople – trad); 7: Vale me stin agkalia sou; 8: Antikrystos horos (Opposite dance – trad); 9: Smyrni me ta perichora; 10: Aptalikos from Mytilini (Trad); 11: Harmandalis zeibekiko (Zeibekiko dance from Lesbos Island – trad); 12: Romanian cantec, Manes tis augis (Amane/Lament song – trad) & Romanian hora
Personnel – Dimos Vougioukas: accordion; Tcha Limberger: violin and vocals; Benjamin Clement: guitar
Released – 2017
Label – lejazzetal Records
Runtime – 55:24
RAUL DE GAMA