Nicholas D. Ball is a prominent figure in the flourishing traditional jazz scene in London, and one of the world’s pre-eminent authorities on the early history of jazz drumming.
He was born in Bristol in 1983 into a family with seafaring roots, and grew up on the same street as the actor Cary Grant had many years before. Both Nick’s parents were amateur musicians and encouraged him towards music from a very young age. He began taking lessons aged 7, studying drum kit and orchestral percussion with two highly-respected local teachers. Working professionally for the first time at the age of just 13, throughout his ‘teens Nick performed rock, jazz and classical music in almost equal measure in venues around the West Country and also studied singing. Gradually jazz drumming became his primary interest, and in 2004 he made the move to London to complete his musical education at Trinity College of Music, Greenwich. During this period he learned a great deal from drum professors Dave Wickins and Gene Calderazzo, won the Ronnie Verrell Commendation for big-band swing drumming and also undertook extensive studies in composition and arranging.
Since graduating from Trinity and turning professional in 2009, Nicholas has increasingly chosen to specialise in the period during which the drum kit came of age as an instrument, and in the performance styles of the very early jazz drummers. His first foray into this scene came via forming and fronting Albert Ball’s Flying Aces, an ersatz ‘Aviator Orchestra’ specialising in Great War-era ragtime, ‘jass’ and pop songs. In 2010, responding to an advertisement seeking musicians interested in early jazz, he met twenty-one-year-old Alex Mendham, a budding crooner and would-be bandleader. After a successful audition Nick was invited to become a founder member of Alex’s band, and still occupies the drum chair today. In the intervening period Mendham’s orchestra has become the most successful British ensemble of its type. With the AMO Nick has recorded three albums, performed in venues as diverse as Kensington Palace, Blackpool Tower Ballroom and Highclere Castle, appeared in a Marvel action film, and travelled the world from Russia to New York City.
Nicholas’s immersion into the world of early jazz accelerated further in 2014, when he was invited to perform at the International Classic Jazz Party for the first time. The Jazz Party is a unique event held yearly in the North-east of England involving many of the elite practitioners of traditional jazz from all around the globe. Meeting and performing alongside musicians from other generations who had spent their lives devoting themselves to specialising in this field was hugely inspiring for Nick, and caused him to redouble his efforts. He has returned to perform at the Party again in every subsequent year, becoming a dependable member of the repertory company and even contributing occasional concerts as musical director. In 2016 he led a set marking the centenary of the pioneering British-based group The Versatile Four, and in 2018 recreated the hilarious and unforgettable sound of the early Mound City Blue Blowers.
Since 2015, Nick’s primary focus has been on his work with the Vitality Five, an all-star quintet of London’s most dedicated hot jazz specialists. The Five initially developed out of a series of informal workshops and jam sessions, and has. The emphasis of the band is on intricate and original arrangements of obscure and esoteric small-group material from the 1920s, played with great energy and brio – a rare combination which has gradually risen to become a genre leader within the UK jazz scene. In the Vitality group Nick performs as drummer and also arranger – a role in which all five members contribute equally. The Vitality Five have recorded two full-length albums and a series of two-track ‘E-78s’, performed at festivals across the UK and Europe and appeared live on BBC Radio 3’s In Tune programme.
One of the most rewarding and unusual parts of Nicholas’s career is his work with the Lucky Dog Picturehouse, a company which specialises in screening classic silent films from the 1910s and 1920s with new (though period-authentic) live scores. Performing and writing with the LDPH has allowed Nick a rare and fascinating insight into the little-known role that percussionists played in contributing timely sound effects in the early cinema, and often stretches his skills to the limit – occasionally even requiring new sound-making devices to be built from scratch! Nick has also composed complete scores for the Lucky Dog Cinema Ensemble quartet, the company’s flagship group. In 2015 he notably contributed several original soundtracks for a series of early British silent comedies for the BFI, and he has also collaborated with other LDPH composers to produce feature scores for Buster Keaton’s ‘Sherlock Jr’., and the Arthur Conan Doyle dinosaur epic ‘The Lost World’ among others.
In late 2017, frustrated with the fact that accurate and detailed information about early jazz drumming and drummers was scattered and hard to access, Nick decided to begin writing a website bringing together all of his ongoing research into the subject. The result was https://drumsinthetwenties.com, an ever-growing online investigation into the early years of the drum kit as an instrument and the musicians who played it in that period.
As a period music specialist, Nick has also performed as soundtrack and onscreen musician for a number of historical films and TV productions. In 2015 he appeared in a Second World War-set sequence in the Marvel film ‘Avengers: Age Of Ultron’ and in Steve Coogan’s comedy ‘The Look Of Love’, whilst on TV he appeared regularly as a band member in ITV’s ‘Downton Abbey’ and ‘Mr Selfridge’. His virtuoso playing of the spoons was also featured in a Channel 4 advert for Jamie Oliver’s cookery show.

In addition to his musical activities Nick is also an illustrator and graphic artist, a keen tall-ship sailor and an amateur football (soccer) player. 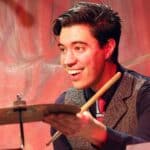 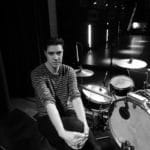