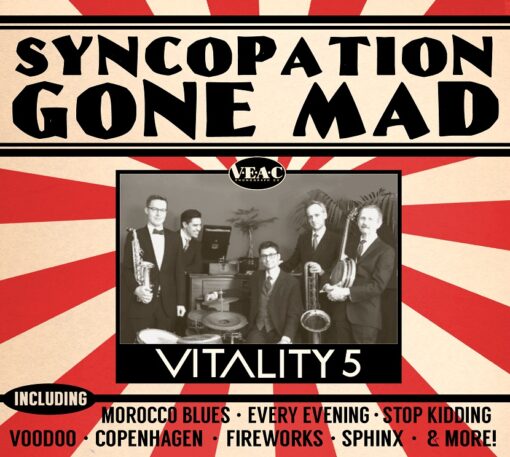 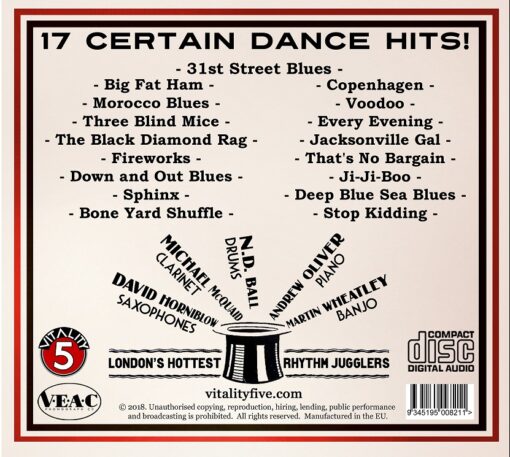 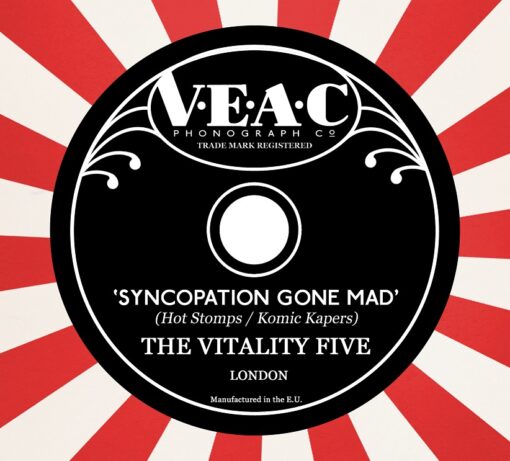 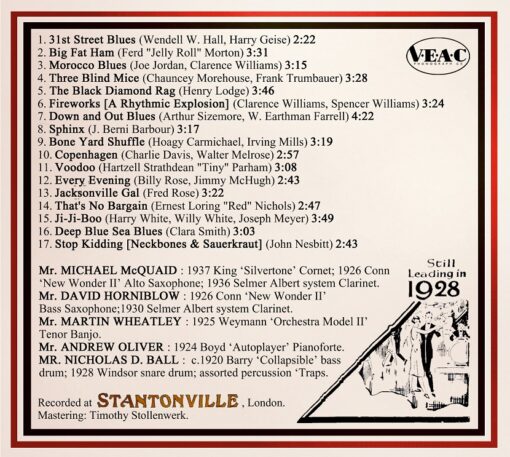 2018
Rarely performed gems from the vast repertoire of 1920s jazz in all its diverse styles.

THE SYNCOPATED TIMES 01.10.2019
The Vitality Five Syncopation Gone Mad
If you’ve heard even 30 seconds of this album you’ve probably already run off to buy it. Every moment of this record is chillingly good and stunningly hot. The Vitality Five are easily among the top formations playing traditional jazz in the world today. Professionals at their creative prime who each would be the star of any band fortunate enough to have them. Individually they shine at Whitley Bay and other events around Europe. Together they’ve been making pure gold since 2015.
The lineup, culled from three continents and based in London, consists of Michael McQuaid on trumpet and reeds, David Horniblow on reeds, Martin Wheatley, Banjo and Guitar, Andrew Oliver, Piano, and Nicholas D. Ball on drums. Each of these men have had careers worthy of full profiles in this magazine, and I hope we get around to all of them.
The goal of the group musically is to tap into the explosion of creativity that was jazz in the 20s. They focus on the blues, rags, and stomps recorded by groups like the California Ramblers and Morton’s Hot Peppers. The results burn with the creative fire of ’28 when jazz was still being redefined every time musicians hit the studio.
Many groups who attempt to make artistically minded traditional jazz slow things down. The Vitality Five have instead produced a roller coaster of an album, 17 tracks of shock and awe for the most decerning ear, and pure joy for anyone who just wants to groove. With the exception of “Fireworks” and “Copenhagen”, the titles themselves are not commonly heard, but they are very well sourced. Clarence Williams, Frank Trumbauer, Tiny Parham, Red Nichols, Jimmy McHugh, and several others get composer credits. The groups that originally played these tracks include the ODJB introducing “Sphinx”, and The Original Memphis Five recording “Jacksonville Gal”.
Henry Lodge’s “Black Diamond Rag” is such a natural vehicle for jazz, and such an enjoyable composition even as ragtime, that I was shocked to only find only one rather uneventful treatment of it by Terry Lightfoot. The Vitality Five play the track close to the original but the heat they build is seismic. It could be used as a demonstration of what differentiates Traditional Jazz and Ragtime. Passing from that track into “Fireworks” you get the impression of listening in on the Hot Five as they created new experiential wonders day after day, the burn becomes almost too hot to take.
Fortunately, they cool it down, momentarily, with “Down and Out Blues”, a slow moving lava heat, before kicking things up again. Andrew Oliver has an amazing technique. When his piano is allowed to come to the fore the rest of the world drops away. The bandmembers appear in a variety of formations together, McQuaid, Oliver, and Ball have a trio, Horniblow, Oliver, and Ball have another. (Both lineups have albums on deck for review in months to come). Several members also play together in The Dime Notes, on other projects, and even in other styles. There is an experienced sense of anticipation as they weave amongst each other, and one of perpetual surprise.

To achieve an authentic sound, the newest of the instruments played is a cornet from ’37, with most being from the ’20s including Ball’s drum set and a 1924 Boyd ‘Autoplayer’ Pianoforte. They play with creative drive, but it is a drive for authenticity as well. Some of them do or have played in modern styles, but here what is modern is the attempt to harness the lost late 20s moment of artistry for new artistry, rather than simply recreate a sound.
JOE BEBCO