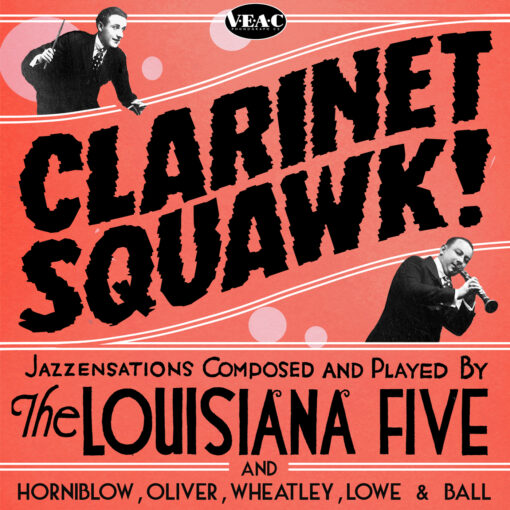 THE LOUISIANA FIVE played jazz like no other band ever has before or since.
Until now..

In 1919, a strange, unique and long-forgotten jazz band blazed for one brief but glorious year, outshining illustrious rivals, cutting dozens of records and taking New York City by storm. Led by Anton Lada and fronted by Alcide “Yellow” Nunez, THE LOUISIANA FIVE played jazz like no other band ever has before or since…. Until now.

In 1029, the year of their centenary, VEAC Phonograph Co. is proud to present “CLARINET SQUAWK!”, a tribute to the Five in an unusual format – part reissue, part recreation. Part One is a celebration of the recorded legacy the Five left behind exactly a century ago. It comprises brand-new digital transfers of seven classic Louisiana Five sides – century-old survivors from 1919! – sourced from our own record collections. The tunes we’ve selected represent a cross-section of the Five’s repertoire, and are taken from the better-condition records in our collections for ease of listening. In Part Two, we’re delighted to present our best attempt to recreate this unusual chapter in jazz history, recorded during the autumn of 2019 in London.
Download includes a 19-page PDF by Nicholas D. Ball with extensive research and new information on the Louisiana Five and its members, archival photos and information on the recreation process.

Tracks 1-7 from the collections of and audio restoration by David Horniblow, Nicholas Ball and Andrew Oliver.

VINTAGE JAZZ MART UK 01.02.2020
CLARINET SQUAWK! The Louisiana Five’ & ‘Horniblow, Oliver, Wheatley, Lowe & Ball’
It’s almost exactly 100 years since the ‘Louisiana Five’ passed into musical history. As the liner notes on this CD correctly say, jazz critics and historians have not treated the band kindly, describing them at best as, perhaps (and I paraphrase!), Original-Dixieland-Jazz-Band-like. Brian Rust disliked them, because the lead instrument was a clarinet ‘… and that’s not the function of [that] instrument in a Dixieland ensemble.’ Well, I’m not sure it’s our function to be prescriptive about a musician for breaking the mould; but in any case, I think the great discographer was wrong; I’ve always liked the sound of the ‘Louisiana Five’ and in fact one of the first records I ever junked was Columbia A2775 I Ain’t’en Got’en No Time to Have the Blues. I still have it – the same copy – some 60 years later; but I do remember that I could not, at that point (the late 1950s) find any information whatsoever about the group anywhere. Even today, they rate only a few lines in Wikipedia, whilst the ODJB entry runs to several pages (and even Wilbur Sweatman, whose Slide, Kelly, Slide backs the above Columbia issue, gets five times as much space). A few of their sides have been re-issued as part of CD compilations, but the only full set was issued on a Ristic double LP 50 years ago – a collector’s item in its own right by now!
This present CD is part re-issue, part tribute compilation… copious liner notes (19 pages long, no less) now provide all the information you are likely to need about this pioneer group, its members, their history and instruments. The first seven tracks are new transfers of ‘Louisiana Five’ originals, from Columbia, Emerson and Edison, all recorded in New York City in 1919. The second seven are tribute re-creations, played from transcriptions of the original recordings, by David Horniblow, Chris Lowe, Martin Wheatley, Andrew Oliver and Nicholas D. Ball, on C-clarinet, period Olds trombone, 5-string banjo, upright piano and period ‘traps’ respectively; they were recorded a century later in London… and very good they are too. But what a labour of love it must have been doing the transcriptions; the accuracy of these and the care with which the musicians have reproduced the original sound – and sound balance – is extraordinary. B-Hap- E is presented in both the original and re-created versions, so we can make a direct comparison; otherwise, the material in the two sections is made up of different titles. The main difference, of course, is that the re-creations are recorded electrically – though using just a single microphone – whilst the originals are acoustic; but what is in that regard most interesting is that the dynamics of these early ‘Louisiana Five ‘recordings are quite different to the ODJB or the ‘Original Memphis Five’. Perhaps because the front line lacks a cornet, and Alcide Nuñez plays the higher register C-clarinet, the rhythm section is much more audible: Anton Lada’s drumming is especially forward and the fact that he didn’t use a bass drum presumably meant he could be much closer to the recording horn. But the piano and the banjo are also quite clearly ’there’ (which must have been a boon for the transcribing process!). And this is true for all three recording companies, which might suggest that the band was quite particular in how they were placed around the studio.
If you haven’t heard the music of the Louisiana Five, this CD is an excellent way to get to know it – or to know it better, not least because the 2019 re-creations are so accurate and reproduce the studio balance of the originals so well that you can hear what was going on that much more easily. Without mentioning every track, the recreations of Weary Blues, Dixie Blues and the title number Clarinet Squawk are especially impressive. There’s also a bonus track of the band members trying to work out which keys the originals are played in – not as easy as you might think, given the propensity of early recording gear to run too fast or too slow, depending on the weather and several other factors, not least the lack of a standard concert pitch (which wasn’t agreed till 1929). Amongst the ‘originals’, I think the stand-outs are Big Fat Ma – which features excellent trombone breaks – and The Alcoholic Blues.
When the band broke up early in 1920, most of its members vanished into obscurity. Pianist Joe Cawley never recorded again; banjo-player Carl (or Karl) Berger made one more record, with Elmer Schoebel ten years later; Anton Lada recorded a series of mainly non-jazz titles for Emerson in 1922 / 23, revived the ‘Original Louisiana Five’ name for a ‘dime-store’ session in 1924 and did one more session for Sunset in Los Angeles in 1925 – all the resulting discs (except the Emersons) are extremely rare. Alcide Nuñez joined Harry Yerkes, but recorded little of jazz merit, had problems with his teeth and eventually retired to New Orleans. Only trombonist Charles Panely (later spelt Panelli) had a mainstream career, playing in groups as diverse as ‘Bailey’s Lucky Seven’, the ‘Broadway Syncopators’, the ‘Tennessee Ten’ and as a regular member of both the ‘Original Indiana Five’ and the ‘Original Memphis Five’… but even he seems to have vanished after 1924. What can be said, though, is that they all have found worthy successors in Horniblow, Lowe, Wheatley, Oliver and Ball!
MAX EASTERMAN

Be the first to review “Clarinet Squawk” Cancel reply