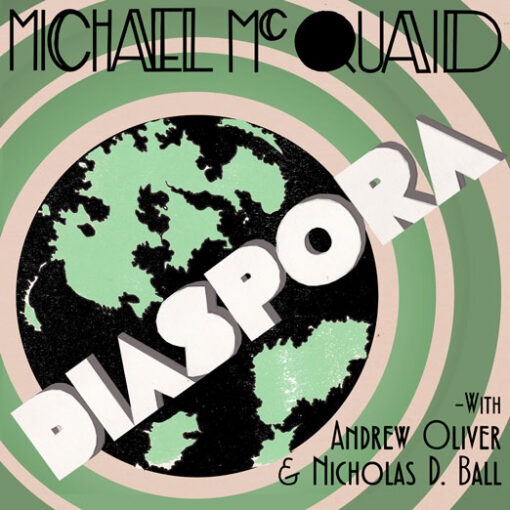 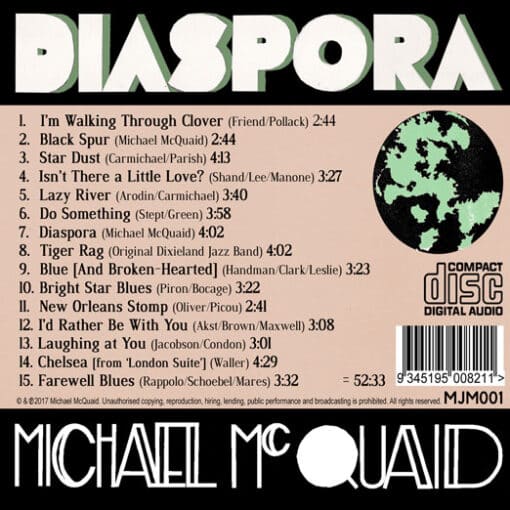 Syncopated Times 15.11.2019
Michael McQuaid – Diaspora
Michael McQuaid is an Australian multi instrumentalist now resident in London and a member of the Vitality Five. His hot jazz chops go back to the mid 90s when at 15 he started making appearances at Australian jazz events mentored by Graeme Bell and other elder statesmen. In 2004 he formed Michael McQuaid’s Red Hot Rhythmakers a larger dance band that was a cross generational success, toured Europe in 2008, recorded several albums, and only went on hiatus when McQuaid moved to London in 2017.
During the 2000s he also featured in a hot quartet called The Sweet Lowdowns. After he gained notice internationally he appeared on an album with the Keith Nichols/Josh Duffee International Jazz Orchestra, and then The Hot Jazz Alliance Bandstand Diplomacy album which created a superband of Australians and Americans including Josh Duffee and Andy Schumm. He currently leads the new Michael McQuaid Saxophone Quartet and tours internationally with a number of big names.
Diaspora was recorded at the beginning of 2017 with his relocation to London still on his mind. He’s joined by the early jazz drum expert Nicholas Ball and American transplant, pianist Andrew Oliver. All three can be found in The Vitality Five or paired in a dizzying array of other trios. This albums catches them when they didn’t know each other quite as well but had a sense of the great things that might be in store. That is to say it catches them at just the right moment to make some fantastic trio jazz.
The 15 track album features two McQuaid originals with the balance being his fresh arrangements of classic era material, much of it obscure. Titles include “Bright Star Blues”, “Laughing at You”, and “I’m Walking Through Clover”, but also “Star Dust” and “Tiger Rag”. The play is fresh, uncomplicated, and easily enjoyed while being delightfully clever. Oliver shines through his passages. Ball is an immensely entertaining drummer. McQuaid brings his ideas for the cuts to life. I’m enamored with this cohort of amazing London-based musicians and anything featuring two or more of them is a must listen. For the last two years that has meant new albums every several months. Diaspora is a peek at where the magic started.
JOE BEBCO

JAZZ LIVES 01.10.2019
Michael McQuaid – Diaspora
A few nights ago, I was sitting in my apartment, entertaining friends (one of them the fine guitarist Larry Scala) and I was playing 78s for them. After a particularly delightful performance, which may have been the Keynote I WANT TO BE HAPPY with Roy, Emmett Berry, and Joe Thomas, or 46 WEST 52 with Chu Berry, Roy, and Sidney Catlett, I turned to them and quietly said, “Music like this is why some bands that everyone else goes wild about do not appeal to me. I’ve been spoiled by the best.”
But there are glorious exceptions to my assessment of the present. One of the shining musicians of this century is Michael McQuaid — heard on a variety of reeds and cornet, even possibly breaking in to song when it seems right. I first heard him live in 2010 and admired him powerfully, and although our paths don’t cross often (we meet every few years, not only in Newcastle but also in Chambersburg, Pennsylvania, and in New York City) he remains a model to me of what can be created within and without those venerable musics. (Full disclosure: he quotes from JAZZ LIVES on his blog, but I simply take that as evidence of his good taste in literature.)
If you’d like to read a brief biography of Michael, you can do just that here, but I will offer three salient facts: he is Australian by birth; he has been playing professionally for twenty years even though he is a mere 35; he and the lovely Ms. Anna Lyttle will take up residence in London in November 2017.
His newest CD, DIASPORA, is an exceptional pleasure. It’s a trio CD — Michael’s first as a leader in this format — where he is nobly paired with pianist Andrew Oliver and percussionist Nicholas D. Ball. When you click on the title above, you can hear selections from the disc, and if so moved, then purchase it from Bandcamp or CDBaby.
But enough commerce. I’ve found it daunting to review this CD in a hurry, not, I assure you, because I had to dig for adjectives, but because each performance — none of them longer than a 12″ 78 — is so dense with sensation, feeling, and music, that I feel gloriously full and satisfied after each track. I couldn’t compel myself to listen to this disc, stuffing in track after track at one sitting: too much glorious stuff was going on. So I promise you that it will not only appeal at the first listening but for many more to come. Michael, Andrew, and Nicholas D. are strong personalities but willing to merge their egos into a band, which in itself is a deep reward for us.
The music here is nicely contradictory: comforting but full of surprises, aesthetically familiar but never rote. “Clarinet, piano, and traps,” as they would have written in 1928, lends itself to all sorts of formulae: the Goodman / Dodds / Noone “tribute” album. Or, more loosely, “Chicago jazz.” DIASPORA, it is true, nods affectionately to early Benny, Wingy, Leon, the Halfway House boys, Fats, Bud Jacobsen, Charles LaVere, and others, but it is not a series of copies: it’s as if Michael, Andrew, and Nicholas D. have made themselves so familiar with the individual songs and the idioms they came from that they are at ease and can thus speak for themselves. There is so much shining energy in their playing: nothing seems forced or tense. And although this would be marketed as “hot jazz,” some of the finest moments in this recital are sweet, rueful, tender: Fats’ CHELSEA, for one.
I asked Michael for his thoughts about the CD, especially because there are no liner notes, and he told me that he wanted to let the music speak for itself, and that DIASPORA has been on his mind for some time: “I wanted to do a project featuring my OWN playing rather than a larger group with a more democratic purpose. I also wanted to record in a very good studio, because I think the clarinet is rarely recorded well . . . it’s just me and my Albert system clarinet! And my colleagues, of course.” [Note from Michael: the recorded sound is superbly natural.]
The songs Michael chose are admiring homages to various clarinetists without imitating them. “For instance, ‘Do Something’ was imagined as a hypothetical Don Murray/Arthur Schutt/Vic Berton collaboration; ‘Tiger Rag’ asks ‘what if Rappolo and Jelly Roll made a trio side?’.”
I’d asked Michael about his original compositions. “‘Black Spur’ takes its name from a treacherous mountain road to the north east of Melbourne, while ‘Diaspora’ is a Beguine/Jazz mix, paying tribute to the musical styles (and peoples) scattered widely throughout the world by the time of the 1920s/30s. Of course, there’s a link there to the album title as well; an Australian, playing music of American origin (broadly speaking) with an American and a Briton, recorded and mixed in London and mastered in Helsinki!”

I hope all my readers take the opportunity to hear DIASPORA: it’s music that travels well.
MICHAEL STEINMAN