Now celebrating its 21st year together, John Etheridge’s Sweet Chorus was originally formed as a personal tribute by guitar legend Etheridge to his mentor and inspiration Stephane Grappelli with whom he worked for 5 years in the 70’s and early 80’s.
Taking it’s cue from the Hot Club of France – the legendary group that featured Grappelli and Django Reinhardt – the band features John’s dazzling guitar work and the scintillating violin of Chris Garrick. The relationship of these two has been described as one of the most potent in European jazz and backed up by the propulsive drive of Kelbie and Crowdy the band produces breathtaking sallies through repertoire both old and contemporary, with originals and standards. Melodically based inspired, swinging acoustic jazz..

Now celebrating its 22nd year together, John Etheridge’s Sweet Chorus was originally formed as a personal tribute by guitar legend Etheridge to his mentor and inspiration Stephane Grappelli with whom he worked for 5 years in the 70’s and early 80’s.
Taking it’s cue from the Hot Club of France – the legendary group that featured Grappelli and Django Reinhardt – the band features John’s dazzling guitar work and the scintillating violin of Chris Garrick. The relationship of these two has been described as one of the most potent in European jazz and backed up by the propulsive drive of Kelbie and Crowdy the band produces breathtaking sallies through repertoire both old and contemporary, with originals and standards. Melodically based inspired, swinging acoustic jazz..

I never wanted to be a star, just a highly respected musician like John Etheridge
STING
Awesome authority whenever he touches a guitar
THE GUARDIAN UK
A virtuoso on acoustic and electric guitars
TIMEOUT LONDON UK
If John Etheridge weren’t so brilliant he might be more famous
THE OBSERVER UK
a small but beautifully formed band
THE SUNDAY TIMES UK 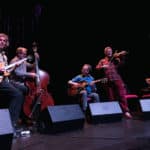 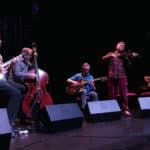 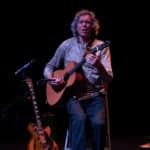 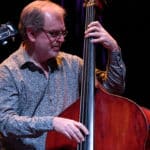 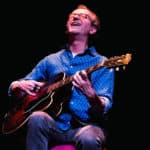 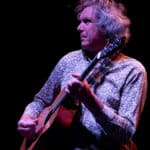 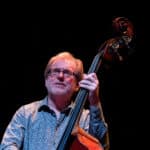 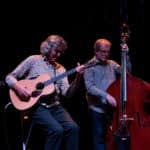 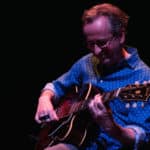 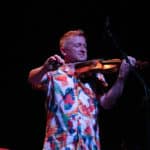 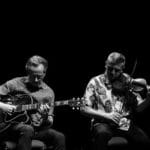 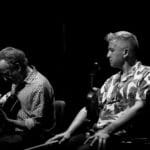 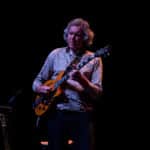 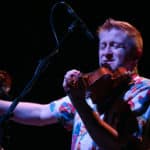 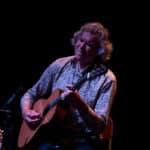 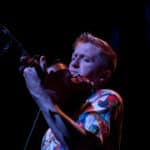 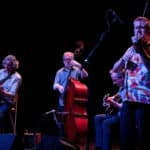 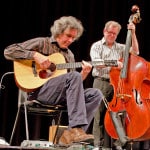 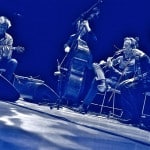 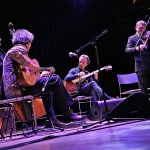 THE JAZZMANN UK 27.07.2011
Played with the kind of care and finesse you’d expect from these four experienced musicians.
John Etheridge & Sweet Chorus
“Small Hotel”
(Dyad Records DY027)
John Etheridge is a highly versatile guitarist who effortlessly straddles the boundaries between jazz and rock and has played with everybody from Stephane Grappelli to Soft Machine. At heart Etheridge is a jazzer and Sweet Chorus is his regular working group featuring old friends Chris Garrick (violin), Dave Kelbie (rhythm guitar) and Andy Crowdy (double bass). The group played a hugely entertaining show in November last year at the nearby (for me) Presteigne Assembly Rooms, a performance reviewed elsewhere on this site.
It was at Presteigne that John was kind enough to give me a copy of this 2009 release and with the group due to visit the Welsh Borders again this coming weekend for the impending Titley Jazz Festival I thought I’d better get on with reviewing it! Apologies to John for not getting around to it sooner!
As the instrumental configuration suggests Sweet Chorus are inspired by the Django Reinhardt/Stephane Grappelli legacy but Etheridge also adds a bebop element to the music, inspired in the main by guitarist Charlie Christian. Live performances also see the group tackling more contemporary material such as Richard Thompson’s “At The Dawning Of The Day” but “Small Hotel” is drawn in the main from more conventional jazz sources with the standards/Django repertoire augmented by a few originals from Etheridge.
Etheridge is also an accomplished solo performer and the album begins with “Porte”, a brief solo piece for acoustic guitar.
Rodgers & Hart’s “There’s A Small Hotel”, effectively the title track, introduces the group. Etheridge’s liner notes state that the tune has been re-harmonised to include what Grappelli would have described as “chinese chords”. There’s certainly plenty of interest going on with some fascinating exchanges between Etheridge and Garrick.

“When You’re Smiling” is an item that has been part of the group’s repertoire for some time. The version here features jaunty solos from Garrick and Etheridge above Kelbie’s brisk rhythm. The brief “Geantology”, an Etheridge original, sees him borrowing John Coltrane’s celebrated “Giant Steps” chord sequence and putting a Django-esque slant on it aided by Garrick on both bowed and plucked violin and, in the latter part of the tune Kelbie’s even brisker rhythms.
“I’ll Be Seeing You” slows things down with the quartet taking things at a more stately “ballad” pace. Kelbie’s gentle chording is the cushion for surprisingly moving solos from Garrick and Etheridge. It’s a fine example of the more sensitive side of the Reinhardt style. “Swing ‘39” another popular mainstay of the group’s set list is despatched with customary jauntiness with Garrick adding some delightfully quirky violin lines.
Etheridge and Garrick have recorded several duo albums, the most recent “Men On Wire” is reviewed elsewhere on this site. The tune “Wise Old Wine”, written by one Adrian Johnson, is a reminder of those records. Apparently it was first played by the duo as part of the soundtrack to the film “Brideshead Revisited”. Here it’s attractively played in something approximating the Reinhardt style with Garrick again alternating between pizzicato and use of the bow.
Etheridge’s love of Charlie Christian’s music is reflected in the choice of Christian’s tune “Seven Come Eleven”. Etheridge’s arrangement adds an extra melody line to Christian’s original and is one of the few tracks on the album to feature electric guitar. Garrick is, as ever, the perfect foil with a soaring solo of his own and there’s a brief cameo from Crowdy at the bass. Elsewhere Crowdy and Kelbie provide suitably lively rhythmic propulsion.
The Etheridge original “Places Between” is a charming update of the Reinhardt tradition with a cleanly picked solo from Etheridge and some gently idiosyncratic Garrick violin lines. It’s not dissimilar to the style of Martin Taylor’s “Spirit Of Django” project.
“Milieu” is a brief passage of improvised solo guitar, which, like the earlier “Porte”, Etheridge describes as “scene setter”. Here it points the way into a lengthy exploration of Dave Brubeck’s “In Your Own Sweet Way” for a trio of just Etheridge, Garrick and Crowdy. All three enjoy extended features on this leisurely excursion with Crowdy demonstrating that he’s one of the most musical bassists around. There is further evidence of this on Brazilian composer Louis Bonfa’s “Manha de Carnival”, a duo performance featuring Etheridge on warm toned electric and Crowdy on melodic and resonant double bass. This piece is something of a live favourite where it also features Garrick on violin.
The remaining three pieces are for quartet commencing with a good humoured, relaxedly swinging version of another Rodgers & Hart tune, “You Took Advantage Of Me”.
“Don’t Worry About Me” begins with a duet for violin and acoustic guitar and contains some wonderfully agile soloing from Etheridge and Garrick as the tune slowly gathers momentum. However a certain melancholy persists behind the undoubted virtuosity.
The album closes with Eheridge’s own “I Saw You Passing By”, a lovely original tune that ends the album on elegiac note. Kelbie’s slow chording gives the piece a gently pastoral air and acts as the backdrop for solos from Garrick’s gently woozy violin and Etheridge’s relaxed, conversational guitar.
“Small Hotel” doesn’t contain any great surprises but it’s played with the kind of care and finesse you’d expect from these four experienced musicians. Despite being couched in the Django Reinhardt style only one tune, “Swing ‘39”, is actually his. Nonetheless Reinhardt remains the prime source of inspiration here but with Etheridge and his colleagues bringing a contemporary slant and plenty of themselves to the proceedings.
IAN MANN

THE GUARDIAN UK 27.07.2011
Small Hotel
John Etheridge can handle just about any style from 1930s Hot Club swing to flat-out bebop, Frank Zappa avant-rock and Claptonesque blues. This set catches him in the Sweet Chorus mode, in which he recalls the vivacious unplugged music of guitarist Django Reinhardt and violinist Stéphane Grappelli (Etheridge is a one-time Grappelli sidekick), but with the stomping, four-square swing and graceful serenading of that style updated with some originals – plus a little amplification invoking the groundbreaking 1940s guitarist Charlie Christian on Seven Come Eleven. Etheridge’s full and emphatic sound mixed with superb violinist Chris Garrick’s languid top notes and cascading codas makes for an ebullient musical chemistry. Garrick’s ideas are in the tradition but arrestingly modern in their incisiveness; the electric interludes and Andy Crowdy’s bass provide just enough variation; and one or two resolving episodes border on free-floating improvisation.
JOHN FORDHAM