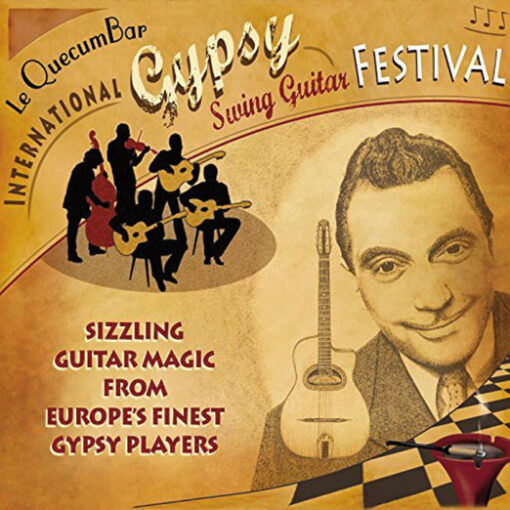 A 3xCD commemorative pack of recordings set over the nine night sold out festival from 2010. Includes star soloists appearing on stage together for the first time; all passionate representatives of the essence of Gypsy swing.

THE OBSERVER 11.07.2010
This triple-CD set contains some truly astounding music. The sheer virtuosity often beggars belief, but it’s the inventiveness and creative abandon in the playing of such masters of the genre as Lollo Meier and Sébastien Giniaux, and especially the multi-talented Tcha Limberger, that make these performances truly remarkable. I can’t say “unbelievable”, because I was there when some were recorded – at London’s Le QuecumBar, back in January, at the festival to celebrate Django Reinhardt’s centenary – and this was exactly how it came across at the time
DAVE GELLY

SONGLINES 11.07.2010
This was music straight from the soul, played in the perfect setting — one of London’s hidden gems
SIMON BROUGHTON

JAZZ PREVIEW.COM 11.07.2010
This music has deep roots, but in its soulfulness, in the versatility of its imagination and in its sheer exuberance, the ability of Gypsy swing/jazz to charm and seduce audiences remains as powerful as ever. Prepare to be enchanted!

LONDONNET.CO.UK 11.07.2010
the biggest collection of Gypsy Swing talent in the UK ever.