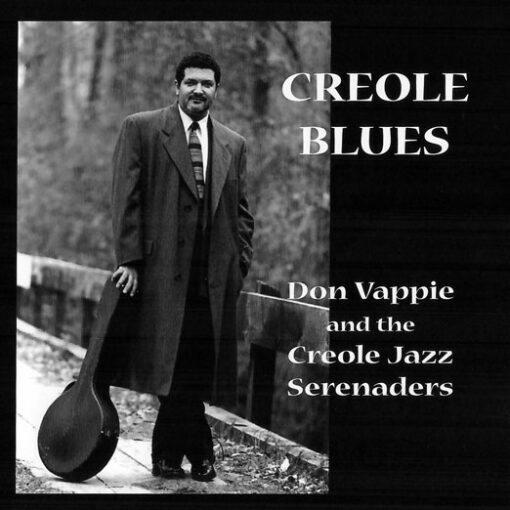 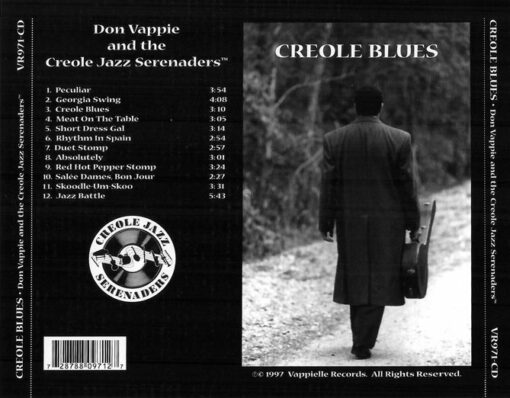 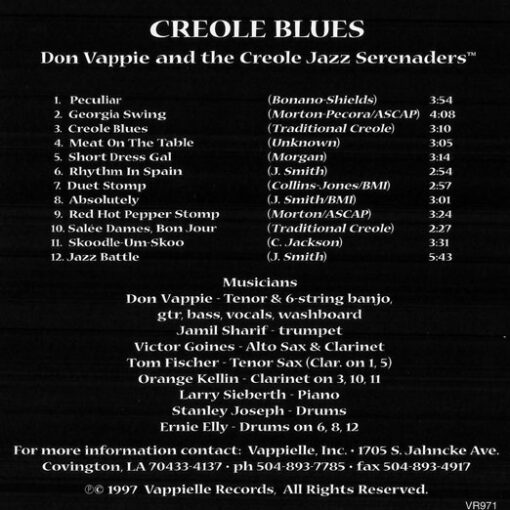 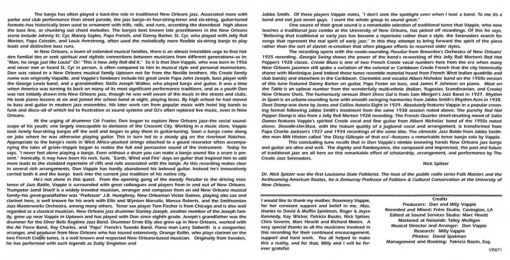 one of the essential 100 CDs of the 20th century from Louisiana
OFFBEAT MAGAZINE
Vappie shows the importance of the banjo in New Orleans music and its often overlooked relevance in jazz
NEGOCIOS PORTUGAL
it’s about time someone showed the jazz world what the banjo really can do
THE OBSERVER UK
Mr Vappie is a born storyteller – an urban griot, who has lived the music and has consigned all of it to the centre of his being
JAZZ DA GAMA CANADA
Don Vappie is not only a solid banjo virtuoso but also a beautiful singer
JAZZ HOT FR
Do you want to travel without leaving your home? Don Vappie & Jazz Créole gives you the opportunity
LA GAZZETTE BLEUE FR
The banjo has a Jimi Hendrix
THE TIMES PICAYUNE US
a superb musician and improviser
AMERICAN RECORD GUIDE US

OFFBEAT MAGAZINE US 01.02.1998
Creole Blues – Don Vappie and The Creole Jazz Serenaders
Perhaps one of the greatest challenges of exploring past genres is keeping true to the style without presenting it like a museum piece. For banjoist Don Vappie, Creole Blues succeeds with a refreshing examination of the seminal New Orleans jazz music from the 20s through the 30s. Vappie and wife Milly carefully researched the album’s selections, making it a classic representation of the era’s lesser-known tunes. Vappie arranged the material to fit his band’s stellar lineup of trumpet, clarinet, alto and tenor sax, piano, and drums.
The 12 selections present a snapshot of divergent and integrated New Orleans’ early jazz music, as well as its evolution. “Creole Blues” and “Salee Dames, Bon Jour” are sung in Creole French, a dialectic variety that historically stems from Martinique. Interestingly enough, these two tunes are among the only nine tunes ever recorded in French by Creole jazzmen. “Meat on the Table” is a prime example of improvisation and tonality with no main soloist, but rather a conversation between clarinet and trumpet. Two Jelly Roll Morton tunes (“Georgia Swing,” “Red Hot Pepper Stomp”) are wailing, swinging dance numbers, with the latter featuring a stunning, polyphonic improvisation between trumpet, sax and clarinet. “Rhythm in Spain” and Vappie’s dreamy crooning on “Absolutely” hints how Crescent City jazz was shifting into a big band sound.
Throughout the proceedings, it’s apparent why Vappie and his cats have to stay in sync. The tempos are not blazingly fast, but they do move with quick breaks that result in a split-second change of soloists. Unlike other styles of music, no one player dominates the melody. Instead, an intense level of interaction is required. With intricate rhythms, breaks, jumping intervals and extended endings, it’s also less linear than other musical styles – which makes it more challenging for today’s musicians. Vappie doesn’t attempt to recreate something that’s already been done, but does excel in capturing its spirit. And based on that, the spirit of early New Orleans jazz is in fine shape.
DAN WILLGING

Be the first to review “Creole Blues” Cancel reply

In search of King Oliver