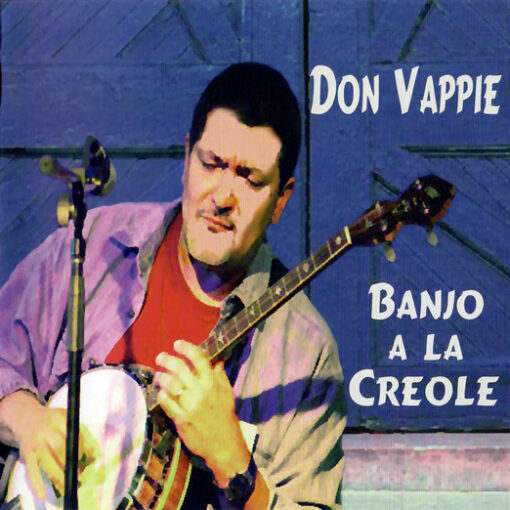 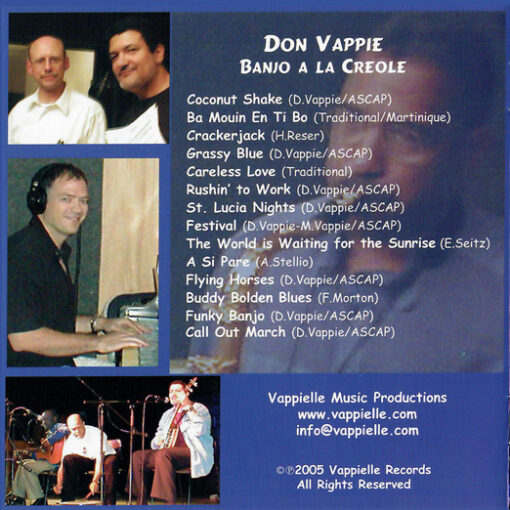 IMPORT
2005
Four-string banjo jazz with one of the 21st century’s greatest practitioners, from the city where jazz was born! With many of his Creole Jazz Serenaders and more of New Orleans’ finest. ​

From start to finish, Vappie brims with technique
OFFBEAT MAGAZINE US
this CD is alive and hot
THE RESONATOR US
Vappie shows the importance of the banjo in New Orleans music and its often overlooked relevance in jazz
NEGOCIOS PORTUGAL
it’s about time someone showed the jazz world what the banjo really can do
THE OBSERVER UK
Mr Vappie is a born storyteller – an urban griot, who has lived the music and has consigned all of it to the centre of his being
JAZZ DA GAMA CANADA
Don Vappie is not only a solid banjo virtuoso but also a beautiful singer
JAZZ HOT FR
Do you want to travel without leaving your home? Don Vappie & Jazz Créole gives you the opportunity
LA GAZZETTE BLEUE FR
The banjo has a Jimi Hendrix
THE TIMES PICAYUNE US
a superb musician and improviser
AMERICAN RECORD GUIDE US

OFFBEAT MAGAZINE US 22.03.2005
Banjo A La Creole. Vappielle Music Productions
Don Vappie recently attended a conference that focused on the banjo’s journey from Africa to the western world and its role in American music. At that summit, he jammed with Cheik Hamala Diabate, a Malian descendent of a long line of storytelling griots, who bestowed the ultimate compliment on him. He said that playing with Vappie was like playing with family. That magical experience served as the impetus for Banjo A La Creole, a recording that’s essentially an expression of Vappie as a New Orleans Creole musician.
Sonic aspects of his heritage are prominent throughout the proceedings, the most notable being the hip-swaying tropical concoctions (“St. Lucia Nights,” “Festival”) that symbolize the Caribbean-Louisiana Creole connection. Several more selections explore this theme, such as the Martinique trad number “Ba Mouin En Ti Bo” and Vappie’s “Flying Horses,” which blends calypso-tinged scatting with modern jazz piano lines. Two horn-strutting, funky banjo numbers underscore the African side of the equation while Vappie’s indigenous jazz man identity is represented by a sauntering rendition of “Buddy Bolden Blues” and the sentimentally numbing “Careless Love.” From start to finish, Vappie brims with technique — witness the lightning-quick staccato runs on banjo pioneer Harry Reser’s “Crackerjack” and the waves of clipping rolls on “The World is Waiting For the Sunrise.” The world, it seems, has been waiting for Vappie for some time.
DAN WILLGING

THE RESONATOR US 01.11.2005
Banjo A La Creole. Vappielle Music Productions
A few years ago, when I first met Don Vappie, I asked him what the difference was between traditional jazz and Creole jazz, he responded by saying Creole jazz has a Latin feel with French lyrics. The legendary Jelly Roll Morton once commented that “Its not New Orleans jazz unless it has a Latin tinge.” Vappie has taken the tenor banjo and transformed its sound into a blend of traditional New Orleans Jazz with the upbeat flavor of the Caribbean. Reaching back to his Creole heritage he has created eight original songs for a total of 14 songs on this CD.
The opening track is called “Coconut Shake” and when you listen to it you feel as if you have just stepped off the boat in the Caribbean. Its amazing how the tone qualities of Vappie’s banjo emulates the sound of steel drums. One of my favorite tracks is an original song called “Going to Work.” Don was motivated to
write this song because he says that he is always working hard and can’t stop working therefore he is often late to other commitments. If you like swing you will like this piece since it has a swing bounce similar to “Puttin’ On The Ritz.” You will also hear Don playing guitar, mandolin and piano on this track as well as his banjo. Also on this CD he plays seven different instruments and features ten additional artists.
Now if you think that all the tracks might sound the some then you will be in for a surprise. One of the songs “Grassy Blue” is a cross between playing bluegrass and the blues. Another is a vintage jazz piece, “Buddy Boldens Blues.” I personally will spend some time trying to steal a few licks off of this arrangement. Its ironic that I picked this one since Buddy Bolden never recorded because he was afraid that other horn players would steal his licks. For someone who first picked-up the banjo as a novelty Don Vappie has turned into a master of the instrument. Most banjo players are not even aware of his presence in the banjo world. To show you that he is for real listen to his arrangements of Harry Reser’s “Crackerjack” or his stylized version of “The World is Waiting for the Sunrise.” To borrow a phrase from Don’s description on how a tenor banjo sounds, this CD is alive and hot.
JOHN MUMFORD

Be the first to review “Banjo a la Creole” Cancel reply