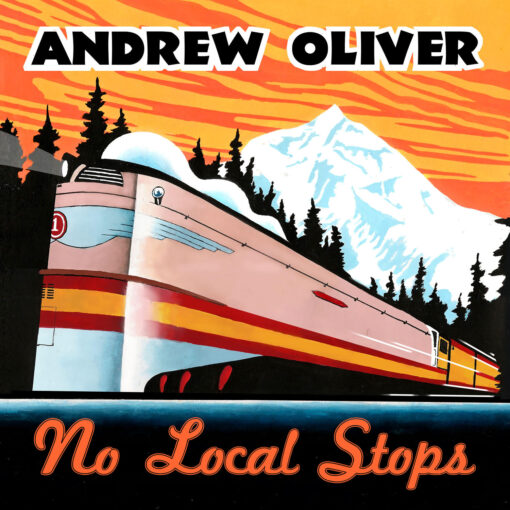 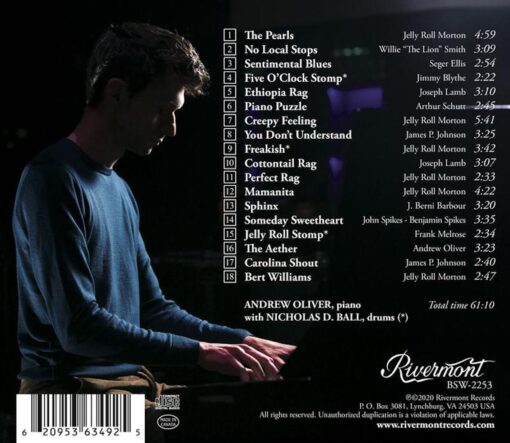 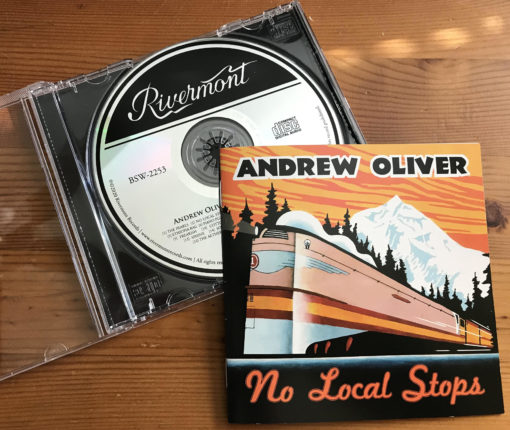 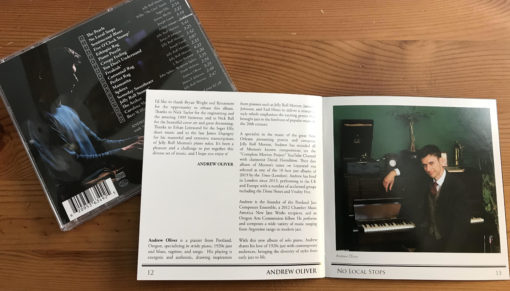 something about his combination of technical brilliance and go-for-broke dynamism that just grabs you THE GUARDIAN UK
A collection that blows away the cobwebs. SUNDAY TIMES UK
Andrew Oliver is almost punk-rock in his attitude about Traditional Jazz and bringing back its visceral nature. KMHD JAZZ RADIO USA
their approach, although perfectly authentic in style, had a freshness and immediacy that was all their own. THE OBSERVER UK
Mr Oliver is a pianist almost completely immersed in the New Orleans style of playing, a relative rarity these days. He maintains swagger and swing through each interpretation. JAZZ DA GAMA CANADA
Phenomenally well played, with a freshness that dispels any suspicion of solemn archaism. JAZZ JOURNAL UK

The Guardian UK 01.08.2020
Works by Jelly Roll Morton and other early 20th-century piano greats just fly in the hands of this 21st-century virtuoso

If anyone is going to succeed in rescuing good music from the ghetto called “early jazz”, it will be the pianist Andrew Oliver. I wouldn’t go so far as one critic, who claimed that Oliver was “almost punk-rock” in his approach, but there’s definitely something about his combination of technical brilliance and go-for-broke dynamism that just grabs you.
No Local Stops is a follow-up to last year’s glowingly received Complete Morton Project with clarinettist David Horniblow. Ferdinand “Jelly Roll” Morton turns up again here, but this time as one of many piano virtuosos of the early 20th century, among them James P Johnson, Seger Ellis and Willie “the Lion” Smith. The styles vary, from pre-1914 ragtime to Harlem stride of the 1930s. Oliver grasps them all so thoroughly that he adapts, combines, modifies and extends the originals – even includes a composition of his own – and not a note or gesture sounds out of place.
Among this collection of notables, Morton still comes out on top, for his mastery of form if nothing else. But if the skill, intricacy and sheer variety of these 18 pieces tell us anything it’s that “early” doesn’t mean “primitive”.
Works by Jelly Roll Morton and other early 20th-century piano greats just fly in the hands of this 21st-century virtuoso.
DAVE GELLY

The Sunday Times UK 05.07.2020
Andrew Oliver: No Local Stops
If you loved the American pianist’s heroic YouTube journey — alongside clarinettist Dave Horniblow — through the Jelly Roll Morton songbook, you’ll be pleased to hear that The Pearls and Mamanita are part of this cultured solo set. James P Johnson’s Carolina Shout turns up as well, but Oliver — part of the spirited band the Dime Notes — has an ear for much rarer pieces too. A collection that blows away the cobwebs.
CLIVE DAVIS

The Syncopated Times UK 01.07.2020
Andrew Oliver: No Local Stops
Andrew Oliver is a pianist, from Portland, Oregon, who settled in London a few years back and has spent some considerable time and effort recording the complete works of JellyRoll Morton. No Local Stops casts a wider canvas: several Morton numbers, certainly, but many more from ragtime (Joseph Lamb), James P Johnson, Willie ‘The Lion’ Smith and even Arthur Schutt and Seger Ellis. The aim, as Oliver writes in his liner notes, is to present a variety of traditional piano styles, ‘…some of the things that have caught my ear and fingers the most over the past few years.’ This CD was recorded using a 1904 Steinway piano, which Oliver says ‘has a unique and characteristically dark sound perfectly suited to the repertoire…’. However true that may be listening to the piano ‘live’, my feeling is – and this is my sole criticism of the recording per se – that the bass is sometimes over-represented and blurs the treble response as well as making the rhythm seem slightly ‘heavy’.
The selection opens with a fine rendering of Morton’s The Pearls, blessedly taken at a very moderate tempo, in deference, as Oliver remarks, to the composer’s late 30’s recordings rather than the faster versions of the 1920s. There are five more Morton tunes featured: one of my personal favourites, which he only recorded as part of his Library of Congress conversations with Alan Lomax, is Creepy Feeling. This is, in my opinion, the most beautiful and sensitive of his habañera Spanish-rhythm pieces: Andrew Oliver’s improvisations are somewhat different from Morton’s but every bit as inventive without ever straying from the spirit of the original. Freakish is one of two tracks on which Oliver is backed by drummer Nick Ball, who manages to sound exactly like Tommy Benford on Morton’s trio and quartet records for Victor! Freakish is, for its time, a good description of both the rhythm and harmonies on this forward-looking piece, which stomps along very nicely, with excellent syncopated cross-rhythms. Perfect Rag and Mamanita are both solos Morton recorded in the early 20s: the latter twice, then again in the Library of Congress set, the former, retitled Sporting House Rag, also for General in 1939, but unissued; it’s a fast showpiece and Oliver executes it with verve and a pulsating, swinging left-hand – a terrific performance. Mamanita is another tune in habañera rhythm, with lovely improvisations, but definitely not enhanced for me in the first half by an over-recorded bass line.
It’s a short musical journey from Morton to his acolyte, Frank Melrose, who recorded just six issued solo sides in the 20s (none of them actually bearing his real name on the labels). Drummer Nick Ball returns to accompany Andrew Oliver on his fine interpretation of Jelly Roll Stomp. Another tune closely associated with Jelly-Roll Morton is Someday, Sweetheart, to the extent that his name occasionally appears as a composer credit alongside the Spikes brothers. Oliver’s version is played pleasantly legato and, as he remarks in the liner notes, provides a change of pace from the highly arranged tunes elsewhere on the CD. The title track, No Local Stops, is a Willie ‘The Lion’ composition, which is one I’ve never heard before and is therefore an entirely new addition to my roster of ‘train’ piano! Smith never recorded it and, apparently, the only version on disc is by Ralph Sutton – which I’ve never heard. It’s easy to understand why it has the name it has: this train thunders along without pause from start to finish – and a very satisfying ride it is too. Some train-style chords open the next track, Seger Ellis’ Sentimental Blues. It’s easy to forget, when considering Ellis’ later career as a crooner, how good his piano playing was, based on Texas blues. Most of the numbers he recorded for Victor were never released, but this one was and Andrew Oliver’s version, whilst stylistically true to the original, offers some new and excellent variations on the theme.

The ragtime composer Joseph Lamb is probably best known for American Beauty Rag, and the two rags chosen for this CD by Andrew Oliver are much in the same style, known as ‘heavy’ rags for their combination of strong melody and advanced keyboard harmonies (Lamb also composed several ‘light’ cakewalk-style rags). Ethiopia Rag was composed in 1909 and is a complex, stately piece with flowing phrases. Oliver makes it even more interesting by interpolating some jazzy, improvised passages. Cottontail Rag was, by contrast, written in 1959, just a year before Lamb died. But it’s very much a classic rag, very similar in style to his early works and given a sensitive performance here, with a lovely bouncing cross-rhythmic bass line.
Jimmy Blythe’s recorded piano solos are both few and extremely rare: he’s best known for his blues accompaniments and rumbustious work in the rhythm section of Southside groups like the ‘State Street Ramblers’ and, in the case of Five O’Clock Stomp, the ‘Dixie Four’. For his rendition of this romp of a performance, Oliver is again joined by Nick Ball on drums, who makes excellent use of the various cymbals and other peripherals of his 1920s drumkit. Arthur Schutt was a musician in a very different mould, who was a stalwart of the early Red Nichols’ ‘Five Pennies’, and also recorded some solos in London in 1924. His piano style was described by one critic as sounding like he was playing in a room with someone constantly opening and shutting the door in between, and this ‘in-and-out’ feature is audible in his solos with Nichols as well as in his own recording of Piano Puzzle. Andrew Oliver doesn’t attempt to reproduce it in his version, which is a fine, spirited rendering of this piece, which has more than the usual ‘novelty’ value of many 1920s piano compositions. James P. Johnson’s magnificent stride piano style features on two tracks: Carolina Shout is one of his best-known compositions, though it was hardly ever attempted by other musicians in his lifetime, with the exception of ‘Fats’ Waller. Johnson’s bass lines were extraordinarily complex, with continually shifting rhythms and accents, which made his work very hard to play successfully: the Shout is performed here with perfect aplomb, one of the most exciting tracks on this CD. Johnson recorded You Don’t Understand several times, as accompanist, as leader of his own band and with Clarence Williams, but never solo. Andrew Oliver admits to taking liberties with his interpretation of this pop tune as a stride solo, but it’s a huge success and certainly makes me wish James P had done the same!

Sphinx might seem an odd choice as a piano solo, being one of the many ‘eastern’ tunes, which littered the Tin Pan Alley lists in the first two decades of the last century. It might well – and probably justifiably – have remained an obscurity had the ODJB not recorded it: it’s not one of their best sides, but this piano version is a much better effort and shows how even the most unpromising material can become fine jazz in the right hands. Those ‘right’ hands are responsible for The Aether, the only Andrew Oliver original on the CD. It’s a composition in the Morton style, in the sense that it has its own ‘Latin tinge’, though based in this case on Brazilian and Martinique rhythms. It’s a splendid example of how such diverse influences can bring an exciting flavour and structure to jazz played in an otherwise traditional style. The final track takes us back to Morton again, but with a difference. Bert Williams is another Library of Congress number, but recorded here as Morton might have done if it had been back in 1923 – acoustically, using a recording horn, though directly onto a 78 disc. The playing is excellent, but the reproduction is not up to the standard even of Gennett, for whom Morton made his first solos. I’m not sure if level of surface hiss has been left deliberately high, but it doesn’t make for comfortable listening!
In these days when so much of jazz piano is rarified and experimental, though there’s nothing wrong with that, it’s good to know there are still traditionalists around, and that they’re also ready to experiment with compositions and styles, which weren’t always totally successful first time around. Andrew Oliver is one such pianist and this CD is a tribute to his commitment to playing whatever he chooses at the highest level. It’s a thoroughly enjoyable selection and I loved it.
MAX EASTERMAN

2 reviews for No Local Stops