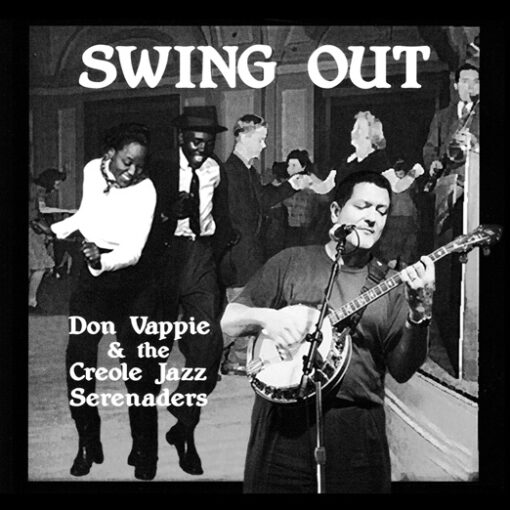 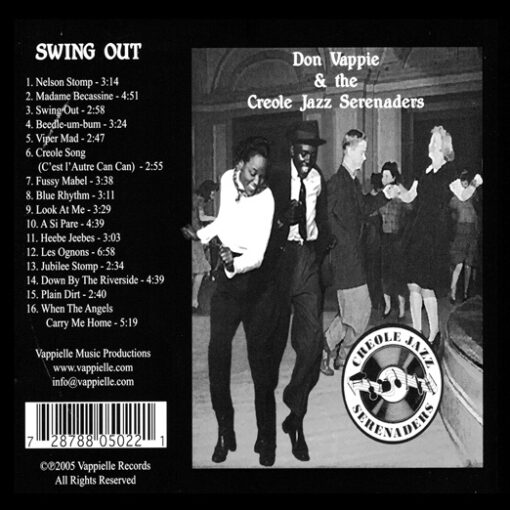 For jazz disciples of any stripe, this double dose of Vappie is essential listening
OFFBEAT MAGAZINE US
Vappie stages a dazzling clinic of virtuosity
OFFBEAT MAGAZINE US
I very highly recommend this CD. SWING OUT is defiantly a winner!
RESONATOR US
Vappie shows the importance of the banjo in New Orleans music and its often overlooked relevance in jazz
NEGOCIOS PORTUGAL
it’s about time someone showed the jazz world what the banjo really can do
THE OBSERVER UK
Mr Vappie is a born storyteller – an urban griot, who has lived the music and has consigned all of it to the centre of his being
JAZZ DA GAMA CANADA
Don Vappie is not only a solid banjo virtuoso but also a beautiful singer
JAZZ HOT FR
Do you want to travel without leaving your home? Don Vappie & Jazz Créole gives you the opportunity
LA GAZZETTE BLEUE FR
The banjo has a Jimi Hendrix
THE TIMES PICAYUNE US
a superb musician and improviser
AMERICAN RECORD GUIDE US

OFFBEAT MAGAZINE US 15.05.2005
Swing Out
Swing Out from Vappie’s Creole Jazz Serenaders is an exuberant affair of traditional jazz loaded with sudden stops, quick changes, snappy high-hat cymbal snappings, clucking banjos and sailing trumpet, clarinet and sax solos that make for vibrant dance music. Similar to Banjo A La Creole, the Creole element in New Orleans jazz is evidenced by a trio of Creole French-sung numbers: Kid Ory’s risqué “Creole Song,” the sexy “Madame Becassine” and “Les Ognons.” The latter is a mature treatment of a children’s folk song in Haiti.
Although the folk song has long been adapted into the New Orleans trad jazz repertoire, and has been recorded and popularized by many, Vappie opted for Danny Barker’s signature arrangement. The song kicks off with clarinetist Tom Fischer playing the infectious melody line before by smooth crooner Vappie sings about cooking chickens and napping. Trumpeter Charlie Fardella shines on the next solo, which is then followed by both Fardella and Fischer madly diverging and converging upon the melody in unison.
Other Crescent City fodder includes a kicking version of King Oliver’s “Nelson’s Stomp” and a swanky rendition of Jelly Roll Morton’s “Fussy Mabel” featuring Fardella’s animated, muted trumpet blowing, Vappie’s crisp guitar picking and Larry Sieberth’s bouncy piano.
The Creole Jazz Serenaders venture beyond the Crescent City to cover significant New Orleans-influenced jazz groups such as McKinney’s Cotton Pickers (“Beedle-um-bum,” “Plain Dirt”) and Mills Blue Rhythm Band (“Blue Rhythm”). On Harry Reser’s soundtrack-resembling “Heebe Jeebes,” Vappie stages a dazzling clinic of virtuosity. For jazz disciples of any stripe, this double dose of Vappie is essential listening.
DAN WILLGING

RESONATOR US 22.02.2005
Now that’s what I’m talkin’ about!
Don’s CD’s are always something to look forward to. On this CD he works as an arranger, composer, tenor banjoist, guitarist, mandolinist and vocalist. This particular CD features his Creole Jazz Serenaders. Most of the selections are in the early hot-Jazz dance band style, which reminds me of the days I spent playing drums with Vince Giordano’s Nighthawks. The tune selection is an encyclopedia of early American music.
The accent on this CD is on the band and Don’s terrific arrangements. There is a nice guitar solo on Morton’s seldom heard “Fussy Mabel,” a chord style banjo solo on Don’s “Look At Me” and a nice filigree run on mandolin at the end of “When the Angels Carry Me Home.” The rest of the CD is great band stuff with a fine group of super musicians and some lovely vocals.
However, two selections contain some of the best tenor banjo work I’ve ever heard. The first is a tune by the wonderful Martinique composer Stellio. It’s entitled “A Si Pare.” This would be a first-rate performance anytime—anyplace. The second is the Harry Reser piece “Heebie Jeebes.” It’s accompanied beautifully by the full orchestra. The sound of Don’s tenor banjo is so much different from Reser’s banjo or even Howard Alden’s OME, where he does the Reser stuff on Stomp Off Records. Although I like a lot of different banjo sounds, in this setting Don’s really works for me.
I very highly recommend this CD. SWING OUT is defiantly a winner!
EDDY DAVIS

Be the first to review “Swing Out” Cancel reply

In search of King Oliver