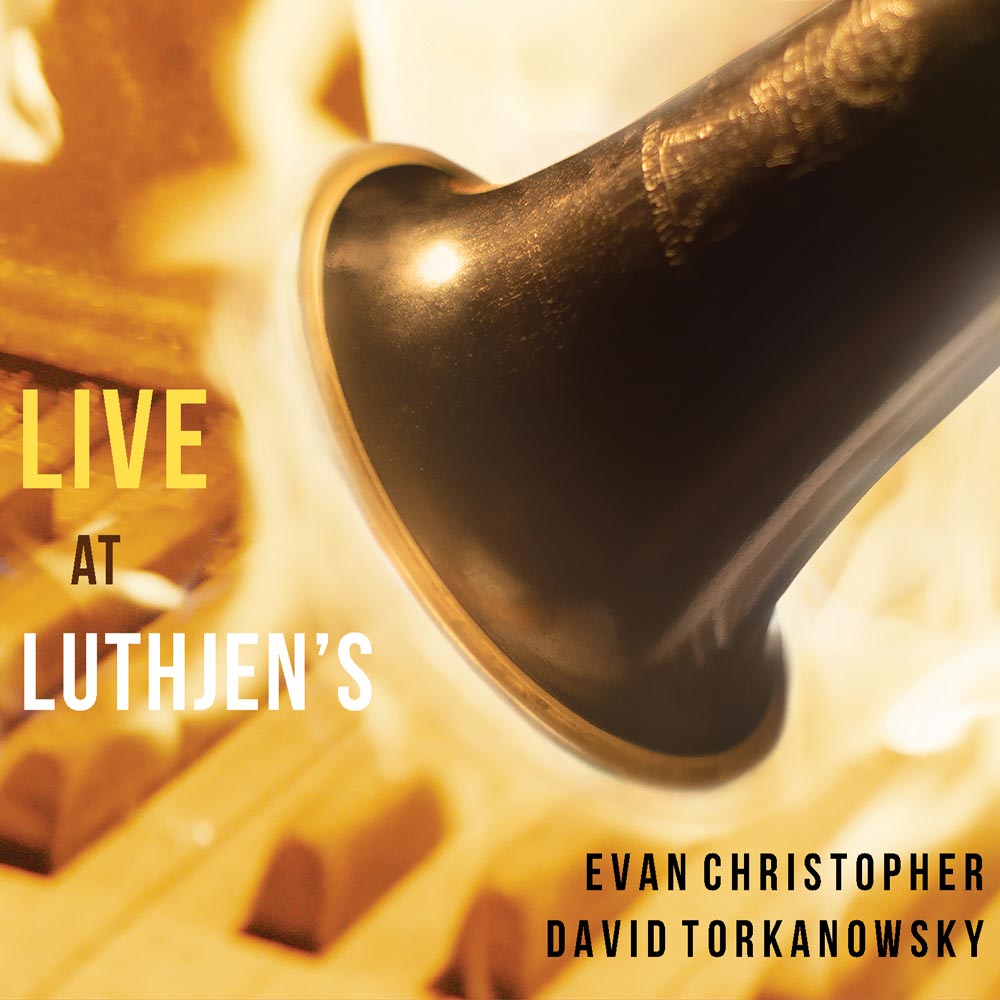 LONDON JAZZ NEWS 25.09.2020
Christopher and Torkanowsky – Live at Luthjen’s
London-based guitarist Dave Kelbie has built an enviable three-way career as performer, promoter and record label proprietor. Perhaps his greatest success has come with clarinettist Evan Christopher as his companion in their popular touring band known as Django à La Creole. With Christopher, a persuasive advocate of the classic New Orleans Creole clarinet style associated with the likes of Louis Cottrell and Albert Nicholas, and Kelbie’s understanding of the role of rhythm guitar as exemplified in the recordings of the Quintet of the Hot Club of France, their band makes for an enticing jazz experience.

Now comes this duo album, recorded as recently as 10 January 2020 in the venerable Luthjens Dance Hall in New Orleans, teaming Christopher with pianist David Torkanowsky, another Crescent City resident and a versatile performer himself. In that the co-principals seem to have issued this album under their own steam, Kelbie’s role is that of distributor, and doubtless, admirer, on this occasion. Luthjens has been re-purposed these days as the Marigny Recording Studio with this session one in a monthly series of live gigs presented there. Unsurprisingly perhaps, the in-the-moment quality of the recorded sound is singularly impressive, Christopher’s cavernous clarinet tone fairly leaping from the speakers as in the opening limpidly slow version of ‘Way Down Yonder in New Orleans’, before he sets up a tango rhythm which his pianist friend embellishes cleverly.

While staying firmly within the city’s clarinet tradition, Christopher seems to have something of the late Kenny Davern’s desire to confound expectations in the way he approaches his art. He’ll chop and change the dynamics of a solo, smearing and stretching notes, dipping into the sotto voce register and concentrating on beauty before rearing up in hot fashion. He loves to under-blow, letting his instrument breathe for him, the sound like a whisper, as he hollows out a note, leaning back on the beat. Happily, none of this foxes Torkanowsky in any way at all. Billy Strayhorn’s ‘A Flower Is A Lovesome Thing’ calls for and receives just this kind of understated, heartfelt treatment, the clarinet almost ethereal in the thematic statements.

Christopher’s original ‘Sid’s Biz’ is a jauntier affair, with a ragtime feel, Torkanowsky echoing Mr Jelly Lord in his stomping accompaniment. Each piece, and there are ten, receives this kind of detailed attention, Christopher playing games with the direction of travel, his eager playmate up for everything. ‘Make Me A Pallet on The Floor’ is more sober, solid rhythmically, beautifully played by this pair and made me think of Morton’s early collaborations with his city’s clarinetists. The low register clarinet here is fervent, Christopher’s control of vibrato direct and emotional, peachy almost, yet another aspect of his virtuoso playing revealed in this close-up situation. Given its bare-bones presentation, it’s pleasing to record that this is an outstanding achievement: musically varied, Christopher free as a bird, with the quick-minded, highly eclectic Torkanowsky happy to play second fiddle until his turn comes to career around the keyboard à la Professor Longhair. The audience clearly loved it all – and so did I.
PETER VACHET